This right here should have been my first clue: 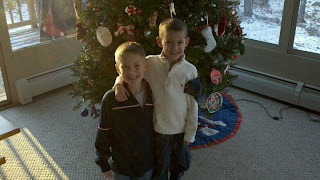 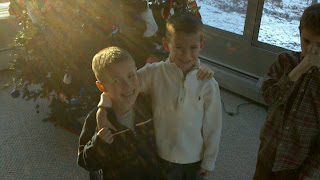 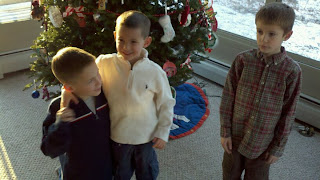 Middle was acting, well, "Middle-ish" as we were taking pictures and preparing for Christmas Eve Mass.

The only reason we managed to get this (frameworthy!) shot of the 5 of us is because while my mom was snapping the pictures, my father and brother were acting like fools behind her, making the boyz laugh. That, and the fact that we threatened Middle with NO PRESENTS FROM SANTA if he didn't SMILE and show HIS MISSING TOOTH RIGHT NOW DAMMIT. 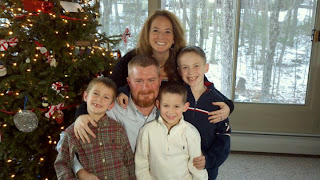 But when we got there, there was no room at the inn were no pews left in the church.

Except for a nice empty front row.  ON THE ALTER.

Bravely, the 8 of us trudged up the looooong aisle.

And took our seats on the alter.  Off to the side, but still.

Middle immediately slumped down in his seat.  And started complaining that his "belly hurt."

And okay, I admit it, I rolled my eyes.  I whispered harshly for him to sit up straight.

I absolutely thought he was faking.  Even though yes, we've had the stomach bug.  But in my defense, he hadn't shown any signs of distress all day!  He only started moping about when he had to change into his church clothes!  So in my mind, I figured, "Coincidence?  I think not."

Hubby and I had whispered conversations about what we should do.  Hubby eventually held Middle on his lap.  We decided to stick it out.  And that Middle was going to be in huDge trouble when we got home for being rotten in church.

And Hubby had had enough.

So he whisked Middle into his coat and led him by the hand off the alter.  Into the side hallway that faced the chapel, where all the overflow people were sitting.

And it was there that Middle puked.

Hubby said later that he didn't know whether to catch it or let it go, so he kinda did both.

And that everyone sitting in the chapel just stared.

No one made a move.

Eventually, someone just threw some wet wipes in Hubby's direction.

By this time, I had been summoned from where I was still sitting.  My neighbor tapped me on the shoulder and whispered, "He didn't make it."

So I tentatively entered the hallway where both Hubby and Middle were kneeling.  Near a puddle of vomit.

I urged Hubby to JUST GO.  GET OUTSIDE.

And then it was just me. Just me and a pack of wet wipes.

On my knees.  In front of regurgitated bologna and pickles.

Eventually, a nice man came up to me with some paper towels.  Bless him.

I got it cleaned up.  But the smell definitely lingered, believe me.

And headed out to the car.  Where Hubby and Middle, both puke-drenched, were waiting to go home.

Hubby and I both agreed that that was DEFINITELY in our Top 5 Most Embarrassing Moments of All Time.

Oh my lord! How embarrassing!! But I'm sure everyone felt bad for you! Poor Middle! I can just picture you kneeling in the middle of the aisle cleaning up puke in front of everyone! I don't know whether to cringe or laugh! I think you should just bring puke bags with you wherever you go :) hahah...okay okay, I'm not nice, but it IS kinda funny :)

Ugh!! At least it didn't splatter any parishioners -- did it?! Now that would be hard to live down.
My boy threw up all over himself (despite the bucket next to his bed) on Christmas Eve night, too. Boo!
Hope the bug has left the Trenches and you can enter 2011 Vomit Free!

Oh no!!! I am so sorry! I can't believe no one helped you out more....just so you know...I would have!! Hope everyone is feeling well!

Yes. I'm laughing. But only because we woke up to my son hurling {almost but not quite} in the bathroom on Christmas morning.

Oh NOOOOO! I know that feeling all too well. When I was sixteen, the little girl I was babysitting for threw up IN THE PUBLIC POOL. And now that I think about it, my oldest once barfed all over the floor of Motherhood Maternity.
Oh, the red-faced shame!

YOu lived my nightmare and SURVIVED. Very proud of you (and glad it wasn't me/us)!

I will take my pee over your puke any Christmas Eve. If your children are anything like mine they will never let you forget the time you didn't believe Middle was sick and he barfed all over the place. It will always be all your fault! The good news is that next year can only get better!

You can kill me for giggling...you really surprised me with the fact that he puked right in the middle of the aisle. That would totally happen to me (and now will b/c I laughed at you). It happens...you rocked the house. You're all on the mend, right???

Oh my goodness... so sorry for all of you. Hope Middle (and everyone) is feeling better.

Oh gosh! Ahhh, so sorry! I have done that so many times too, assume my daughter is getting a "sudden" issue and I always think, one time I am gonna feel really bad when she DOES get sick.

This will be a story you tell for years to come! I am not sure how you do it with 3 boys, I can hardly handle my 1. ha ha!

oh no! Although, I bet most of the people in the church are parents and totally sympathized. Hope everyone was feeling okay for Christmas morning!

We had one on the couch with a fever Christmas day. I thought it was nothing so we continued with our travel plans the next day. Only to find out he had strep and an ear infection. Oops.

Why do the top five most embarssing moments always include either A: a child Or B: vomit or C: both together.
I have to admit both of my top most horrible moments had vomit... and public places.
Maybe next time he will make it!