Waiting is the Hardest Part

I had a dermatologist appointment at 2:45.  To have some more laser treatment done on the port-wine stain birthmark on my forehead. 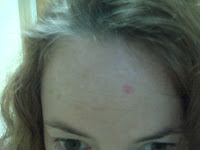 I arrived at the laser clinic right on time.  And then I waited.  In a too-small waiting room that was filled.  The only seat left was a kiddy chair.  I also complained about the loud nose-breather sitting next to me.  On twitter.

After about 15 minutes (which brings us to 3:00, if you're keeping track), I was called into one of the patient rooms.

I played BrickBreaker on my Blackberry.  I twittered some more. I took dorky pictures of myself wearing the protective eyewear (laser can apparently scorch your eyeballs, yo) and before I knew it, a frigging HOUR had passed.  Which brings us to 3:45. 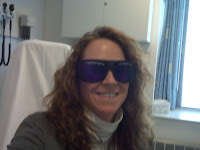 They had me by the balls.  I had already wasted over an hour waiting there.  I had left work early for this appointment.  I certainly didn't want to reschedule.  That was my rationale for staying.

I placate my boyz with those words all the time, buddy.  I know what "10 more minutes" reaaaaaaaally means, mister.

At this point, there was NO WAY I could leave.  I had already invested WAYYYY too much time there.  I was going to be treated, dammit! 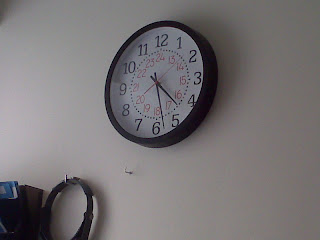 The dermatologist finally came in.  And apologized profusely.  I just stared at him and uttered a few tight-lipped "mmmms".  (I didn't want to be too bitchy, you know?  The guy was about to point a frigging LASER BEAM at my SKULL.) 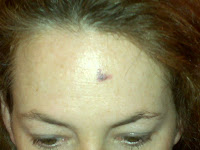 Yes, it's now darker.  And bigger.

So now you're thinking, "Lemme get this straight, Sarah.  You waited for almost 2 HOURS to have a procedure done that makes you look worse than when you went in?!"

(But the mark fades!  Since I started going for these treatments, it has gotten about 50% lighter!)

My next appointment in late June?  I scheduled the VERY FIRST appointment of the day.  Obviously.

So what's the longest you've ever waited in a doctor's office?
And have you ever complained about being made to wait?
Posted by Sarahviz at Thursday, March 18, 2010

I never once noticed anything on your forehead!

I think I waited for about 4 hours once for my OB/GYN. She had a few deliveries that day and I tried to be understanding...but I was very pregnant and very hungry and very thirsty. OB offices should offer catering in for their waiting room patients!

Not the doctors office but the ER on a slow night...I waited 8 hours only to be told there was nothing wrong with me.

Sooooo one of my biggest pet peeves, but you're right...you can't complain b/c they're usually going to help you. I did leave a practice b/c of their long wait times...they never asked...I never told. Seriously, if they offered a water jug of pinot grigio, I wouldn't mind waiting at all!

the after lunch appts are the worst!! first thing in the morning is the way to go. when i read the title and saw the pic i thought you were going to talk about popping a pimple before you should and ending up with a gaping wound on your forehead like i have right now :)

I'm that annoying patient though. The one that taps on the glass or pokes her head out the door every ten minutes once I get to the Super Impatient point.

First appointments are the key!

I waited for about 2 hours for a report on a mammogram. (They totally forgot about me.) I was kind of happy to be alone in a room, by myself, but would definitely rather have been napping.

OB appt -- got there and was told the OB was running behind. I had an ultrasound scheduled,so I asked if I could go ahead and have that done. Lo and behold, TWO babies in the belly! No matter how long I had to wait, I was seeing the doctor! In all, what should have taken 90 minutes took over 3 and a half hours! However, I was very pleased with the outcome!

I have to say that I work at a Dr's office and am proud to say we never keep patients waiting more than 10 minutes EVER! Sometimes one of my Docs runs a little later ( like 20 min) but we offer to reschedule them if there were emergencies that kept her running behind or we help them pick out glasses... whatever to keep them busy. But I have waited over 2 hours in other offices before. Such a waste of time!

I had to have a D&C (early miscarriage before Graham) and as such wasn't allowed to eat.

We got to the hospital at 8am...and I ended up not going in until 4 PM.

As if the situation wasn't hard enough, I was BEYOND HUNGRY.

That is a looooonnnng wait!!! One time I waited over an hour and a half with two boys under a year and a half. Not fun.

Almost 2 hours in the little patient room with all 3 boys, it was TORTURE I was almost in tears by the time the dr. finally arrived. Unfortunately I LOVE their dr. so I couldn't bring myself to just leave and never go back.

I think I waited almost an hour for the gyno once. NAKED.

Which I believe is like 4 hours in clothed-time. So yeah. A frigging LONG TIME.

I never make my patients wait because it pisses me off when they do that! At least let me wait in the waiting room where there is TV!

Like your hair. My German doctor was consistent in making us wait, I think usually 45 min to 1.5 hours. Were I more comfy with the language and culture I would have kicked ass and taken names. It's absurd for doctors to think their time is more valuable than ours. Get a friggin planner people, and learn how to estimate time properly. Every once in awhile, sure, but you can figure out how much time appointments last, and plan accordingly.

I'm always too shy to complain, but to be honest, since I have had children if I am in a waiting room without the children waiting for an appointment for myself, it's like a little mini-vacation.

Oh Holy God! I had seen your tweets and can't believe it took that long! Geez!
Here's hoping the next appt is actually at the time it's scheduled ;)

2 HOURS? That doctor has no respect for your time. You have every right to complain. At the very least, he owes you a free appointment.

I've waited an hour and a half at a doctors appt too, and the doctor did the same thing, came in, apologized, saw me for less than 5 minutes, and left...something needs to be done about this!

I once waited 2 hours for a pediatrician appointment for my TWO YEAR OLD. But, like you, after 30 minutes passes, I thought well I've waited this long and on and on. When I got home I called to talk to someone about it. I got voice mail. I left a message. I'm still waiting for a return phone call.

I never went there again.

Ughg. I hate this dilemma- you've invested so much time that it doesn't make sense to walk out and reschedule and you can't be all pissy with the doctor because, as you said, laser to the head and whatnot.

You had an outrageously long wait!

That's a looong time. I probably would've been wandering the hall sooner than you were. Good call on making the next appointment in the morning, then they can get all behind taking special care of you!

I don't mind waiting at some place like an OB or a doctor who sees patients by triage... but I do hate to go to a specialist appt and WAIT forever... the worst one - and I did complain heavily is when I waited 3 hours and the doc spent time with a DRUG REP instead of patients! Never went back to him....

Okay, seriously, this just happened to me not to long ago. I was waiting, waiting, waiting in the exam room... I finally stuck my head out and THEY HAD FORGOTTEN ABOUT ME.

How can you forget someone? Did they just close up half the shop?

Thank god for the iPhone!

I had been in the hospital once for diverticulitis and had a follow up with the surgeon... I waited 3 hours for a 5 minute visit..

Hmmm...I called my doctor's office for an appointment and listed off all the things I needed "checked". They said they would schedule me for a bit longer than normal.

Day of appointment - I arrived. I waited for about 30 minutes. Got into room. Waited an hour. Finally doctor came in - with about 10 minutes to spare - for her patient - me.

She said that she had time for one problem. So pick one. Literally. She said that. Then she took a look at the one I "picked", said nothing was wrong with me. Oh, but I did need to lose weight and to do that I needed to cut back on sugar. And eat less. To not be fat. Again, she said just that.

Oh, and that I needed a blood draw to test for diabetes.

I was there for anxiety issues and a growth on my foot among other things. NOTHING having to do with my weight, not even as something that resulted from my weight.

Some other stuff was said and she finally flat out WALKED OUT OF THE ROOM. And that was it. No kthxbai, no have a good day, or peace out bitch. She just was standing there staring at me, then turned and left. I thought she had forgotten me again...nope, she went to her next appt.