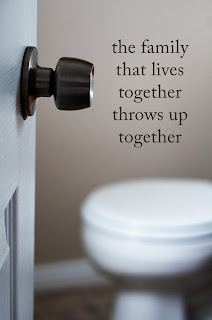 So when was the last time I wrote about the dreaded stomach virus that had infiltrated our Trenches?  (*searching archives now...*)

Ahhh yes.  It was exactly a week ago.

We *thought* we were free and clear.

So we carried on.  I did (yet more) laundry.  I disinfected.  I left all the windows wiiiiide open the entire weekend.

And we socialized.  We went to a cookout on Friday night.  My (poor unsuspecting innocent) friend came over on Saturday with her 3 (ripe for contaminating) children.

Baby was crying that his belly hurt.  Hubby got up to console him and came back a few minutes later.

1:30 a.m.  Baby was crying again.  This time, Hubby brought him into our bathroom.  I sat on the floor with him as he cried and moaned.  But didn't throw up.

He didn't want to go back into his bed.  He wanted to sleep in OURS.

No sooner had all 3 of us gotten settled then he started the gaggy coughing (you KNOW that sound).  And I, blind as a bat without my glasses, fumbled around, trying to grab him.

It went everywhere.  OF COURSE IT DID.

He continued erupting all the way into the bathroom. OF COURSE HE DID.

It kinda looked like the most violent crime scene you could ever imagine.

Except with regurgitated foodstuff instead of blood.

I swear his head may have rotated all the way around. 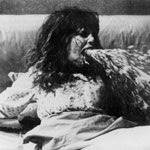 So there we were, at 2am.  Stripping not only the bed, but ourselves as well.  Doing laundry.  Showering.  Scrubbing down the bathroom.  Consoling a poor little buddy.  Commiserating that we both felt queasy as well.

This morning, as I was leaving a message for my work, I noticed I had a text message.

It was from my friend who stayed all day Saturday with us.  That 2 out of 3 of her children were vomiting.

A quick search of my archives revealed that this phenomenon happened to us before - in June of 2007.  We had the neverending virus back then too.  And managed to spread it to everyone we knew.

So if you perchance decide to pay us a visit?  I'm going to strongly suggest you arrive in one of these.  It's for your own good. 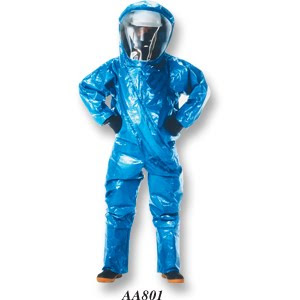 I hope you guys are able to rid the Trenches of the crud that ails your fam!

ICK!!!!! So sorry that you guys are sick AGAIN. That hazmat suit is not a bad idea. :P

Oh no....that stinks when that happens. Hope you all get better soon and for good.

I am so sorry you guys have the virus again...i am so frightened of my family getting it. When my children throw up, i swear their heads spin around too...FEEL better!!

Blech. Mine had it yesterday...

What a nightmare! I feel for you. Hopefully the worst is over.

I guess now is the wrong time to tell you that they rhotovirus (stomach bug) is the most contagious virus out there.

Bleach and bathe in sanatizer.

Thats when we move. Just move. Leave it for the next people

Oh noooo! So glad that ick can't spread between blogs. I can hardly handle puke ...

Hope everyone in The Trenches is feeling 100% again soon!

Ouch! Again? I hate it when this kind of thing happens. Hope everyone is feeling better soon.

Oh no! This just happened to us. I would totally blame you but seeing as how I don't really know you I guess that wouldn't be the smartest. Here's hoping y'all feel better soon!

It's always hard to be 'that' mom. You know, the one who lets her kid play with other kids while (hopefully) unknowingly spreading germs. I'm sorry :( Happens to the best of us! Hope your little guy is puke-free soon, but in the meantime, try to enjoy your (half?) day off :) of outside-of-the-home work anyway.

oh no! that's terrible news. let's just hope this is a small "aftershock," and it's smooth sailing from here on in...

Do you think I'll get sick from coming to your blog? I hope everyone is feeling better soon.

Wait, wait, wait! Hold up. It comes back? Oh crud! We just started gaining the weight back we all lost last week from it.

That's the worst! Having the entire family puking together is a true test of parenthood.

My good opinion of my husband was further cemented when we all had rotavirus together - he held our toddler on his lap all night as they both were puking. What a man!

Heather (One Take On Life) said...

Yuck! That is so unfair. I hope it leaves fast. My little one had the stomach bug Monday am early (3am) but it only lasted a few hours. I live in fear that its going to get another victim.

Oh you poor things! I have had this happen in my family and it's just HORRIBLE! Really does feel like germs are waging war on you.