A Bucket List Item I Didn't Even Know I Had

The stars aligned earlier this month when all 3 of my siblings and I got to hang out together in Colorado to celebrate my brother's 40th birthday. We hadn't been all together in the same room for at least 4 years, so this trip was very exciting. 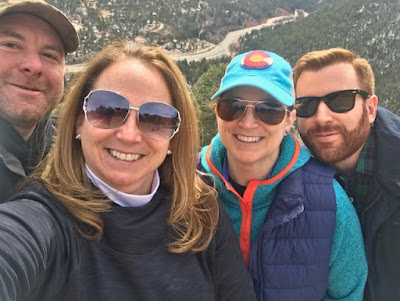 The first full day we were there, we went to Manitou Springs, CO, home of the Incline. I had seen this massive "thing" before, when my husband and I were in Colorado for the baptism of my niece in September. It literally looks like a ladder going up the side of a mountaintop. Straight up into the sky. I (kinda) wanted to climb it then, but it was a no-go from Hubby.

That day the 4 of us were there, my Sis and I were taking some good-natured ribbing from our 2 younger brothers, who insisted that there was NO WAY we could make it to the top. All this, of course, while the 2 of them had NO intentions of doing it themselves (my brother who lives in CO has done it numerous times already, so he gets a pass; and Birthday Boy? No way-he'd die). So their plan was to go find a library, and by library I mean bar, until we were through. 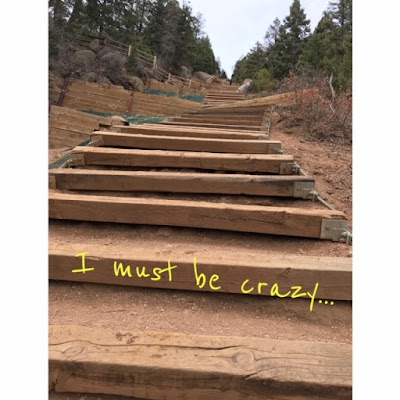 And so we began. Let it be noted that we were already out of breath...before we even started. The altitude is NO JOKE. I mean, I knew in my head that my legs would get hurty, but I definitely didn't take into account the whole "not being able to breathe" factor.

Everyone attempting the Incline is super friendly and supportive. You're all in the same boat together. I was surprised by the amount of solo hikers, and I'm glad we went on a day that wasn't crowded.

The steps, at times, were close together and easy. And then, at other times, they were further apart and STEEP. And the higher we climbed, the more dizzy we got, both from the altitude and just looking back down. At some points, I was climbing the steps like an actual ladder - using both my hands and my feet. And so we kept going up. 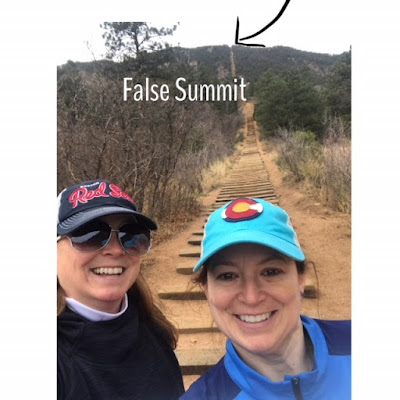 And oh yeah, there's a false summit. Thank GOD I knew about this beforehand, because it literally would have broken my spirit. I would 100% had a meltdown if I reached that point and then realized there was more to go. And there is - more to go. When you hit that part, it's just MANY MORE STAIRS STRAIGHT UP. There's no flat part, no curve, no landing. Just more stairs that happen to be out of sight from the bottom. And so we kept going up.

[Fun fact: My brother once tricked my Dad with the false summit. "You only have this much further to go, Pops. You can do it!" And then once they reached it, there was LOTS of swearing, but my Dad forged on to the top.]

Once you get started, there's really no way to quit. Before the false summit, which is about 3/4 of the way up, there is a point where you can get on the trail to go back down. But other than that? If you want out, you're heading back down those stairs. And for me, that was a huDge HELL NO. I could just picture myself pitching forward and tumbling down down down. And so we kept going up. 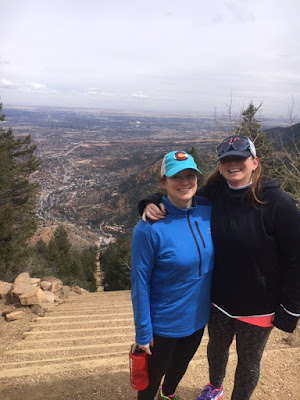 Eventually...finally...gloriously...we made it to the top. Sweaty, (still) out of breath, and triumphant!