Summertime, And the Living Isn't Easy

"This summer is going to be a nightmare."

---E-mail from my husband to me, today, on only the THIRD day of summer vacation for the boyz, as both of us, from work, were trying to figure out who was getting who to baseball, who was going to what party tonight, who was getting a ride with who, and maybe, just maybe, squeeze in dinner tonight? Like at some point, maybe we can eat?

We don't even need to pay someone to be a *body* anymore. Just to make sure they don't microwave aluminum foil or physically harm each other. They hopefully know better...and what I don't know while I'm at work is fine by me, as long as the house resembles a home and not a frat house when I return. They are aware that if there is an emergency to call their father 911.

And they certainly already know how to call Domino's Pizza, as evidenced by the empty pizza box on Tuesday. Apparently there was a lunchtime delivery. Paid for by Middle with birthday money. I'm not sure what the other 2 owe him for that, or how they convinced him to spend his money. I didn't ask.

Yes, there are still chore charts. (4 years and counting of them!) Obviously, the responsibilities on those charts have gotten a bit more involved, yet I still find myself writing down BRUSH YOUR TEETH as a task. (Does this ever end?)

But here's the difference that we're noticing this year. They are now teens and pre-teens with active social lives and activities. They are constantly connected to their friends via Snapchat, Facetime and texts.

On days 1 and 2 of summer vacation, I was already getting bombarded with requests to go all the places and do all the things. So today, I took the offensive and forewarned them: 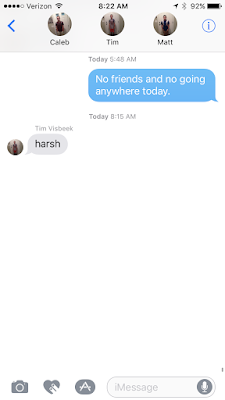 I have a feeling that it is going to be a loooooong summer, you guys.