When you're a family, the mealtime ritual slowly evolves and changes along with your children. You transition from breast or bottle to staring at all the little jars of baby food in the grocery aisle until you go cross-eyed wondering if Oh Precious One will enjoy peas or green beans more? You go from high chairs to booster seats. (How gross is cleaning a booster seat and finding petrified hot dog?) You go from teeny tiny chopped up food (choking hazards!) and Cheerios (oh, the Cheerios!) to developed little humans with actual tastes and preferences.

It is at this point that dinnertime becomes an actual Thing That You Do.

Meal planning sucks, does it not?

You work a full day, come home and walk in the door to 3 expectant faces staring at you and asking, "So what's for dinner, Mom?"

Confession: Yes, we do eat a lot of pasta.

[Sidebar: I've also found that it's so much easier to plan than to not plan. When I don't plan meals, I end up making 3 separate things, which is annoying and time-consuming. Or I rebel and they make their own meals. Which? Fine. Great, even. My boys are learning their way around the kitchen and are being self sufficient! Give me that parenting medal. But how long, exactly, can one live on cream cheese bagels, ramen noodles or spaghettiOs?]

But then, along came Pinterest. And with that, a whole new world of recipes opened up to me! Especially crockpot recipes for those busy weekday nights. (Ask anyone who knows me - I do enjoy singing the praises of a good crockpot meal.) Some have been keepers for sure, and I actually don't mind wasting time on Pinterest searching for uncomplicated dinner recipes.

Admittedly, there have also been some stinkers: 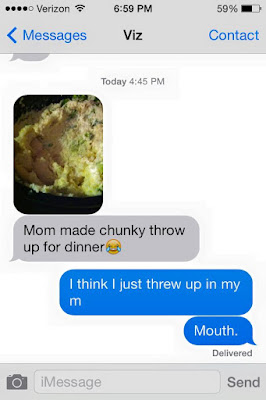 But yet, I forge on, in the hopes of answering the "what's for dinner?" question with a June Cleaver-worthy nutritious meal that the whole family will enjoy.

Lately, though, I began to notice that the natives were becoming restless. It seemed like every meal I made was met with a grimace, a negative comment, or hell, even a blatant, "Ewwwww, why'd you make this?"

I finally reached my boiling point about a month ago. It was an unexpected snow day, and I had already planned to make a new slow cooker pork chop recipe. So I went ahead with that plan. Unfortunately, the end product wasn't great looking in presentation, and ended up being average tasting (at best). But hey, it was a new recipe and it's good to try new things, right? The rest of my family did not agree. There was a LOT of complaining. And with that, I was DONE. I was soooooooooo tired of planning weekly meals. Having to think about them, having to buy for them, having to negotiate our sports schedules in order to be able to cook them. DONE.

It was then that I had a breakdown and yelled at everyone for not being appreciative a new family rule was implemented. Starting from oldest (Hubby) to Youngest, each week was someone's responsibility to plan the meals for the week, from Sunday through Thursday. (Fridays and Saturdays we typically eat take-out or go to a restaurant.)

And it has been great so far! Hubby's week consisted of burgers, topsy turvy (breakfast for dinner) and some other family staples. Eldest requested baked haddock, which was something out of the ordinary, along with his favorite, chicken marsala. Middle's all-time favorite food is mashed potatoes, but since we wouldn't let that qualify as a meal, he relented to having meatloaf with it. And this week is Youngest's turn, consisting of pork bbq in the crockpot and also a balsamic chicken recipe.

I've found it interesting to see what everyone picks, along with finding it somewhat of a relief that they actually don't mind having the same things over and over. Here I was putting pressure on myself to come up with new and interesting dinner ideas, when in fact the rest of my household truly loves having Taco Tuesday each and every week! 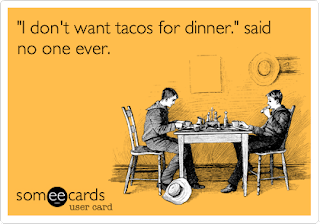