I'm happy to be a part of the Media Day experiences at Six Flags New England. The boys and I have been attending these events since 2011 and have been wowed each and every time! 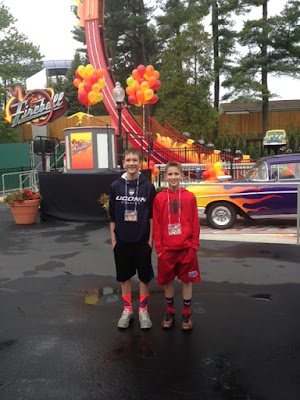 Middle is my amusement park aficionado and hasn't yet met a ride he won't do.

So this new season, folks, for your riding pleasure, there are TWO new experiences for you at Six Flags New England!  The first one is a rollercoaster named Fireball (....aaaaand now you have the Pitbull song in your head). It's a 7-story perfect circle that rocks you forward and backwards...and then spins you right round, baby, right round.

And if that isn't enough for you... 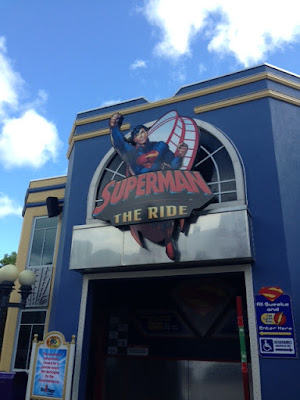 For this Media Day, we really had NO idea what to expect...and what we experienced FAR surpassed any of our expectations, I swear to you! Once you get up to the ride, you are fitted with a wireless headset that velcros on your head and gives you 360 degree views of "Metropolis". You are basically part of a cartoon world.

Note: It takes a LONG time for everyone on the ride to each get fitted (and then subsequently adjusted) with a headset. A LONG time. As in, there is no way in hell I would stand in line for 2+ hours on a 90-degree Saturday and wait to ride--putting on a headset that 50 other (sweaty) people have already worn.  So plan accordingly.

Note 2: Actually, I can't imagine this ride ever NOT being crowded, because the experience is so new and unique. So perhaps worth the wait?? I'll let you decide.

Note 3: Children under 12 are not permitted to wear the virtual reality headsets, but I have no idea how they're going to check/enforce this at the park.

Anyway, once the ride starts, you are instantly face-to-face with Lex Luthor, Superman's enemy, on a broken train that is careening through the sky. The cool thing about the experience is that you are so immersed in the story that you forget you're on a roller coaster and you have no idea what's coming next!

It was unlike anything I've ever experienced, and we were lucky enough (because it was Media Day and they were doing lots of news stories/interviews/live web cams) to get to ride it twice in a row! WAY COOL. 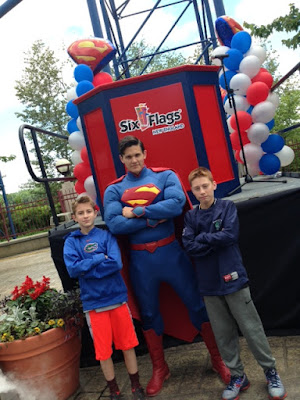 Good looking! Oh, and the boys are too. Heh!