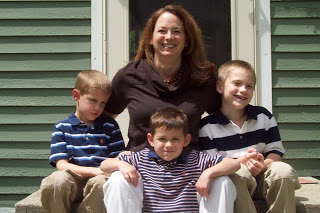 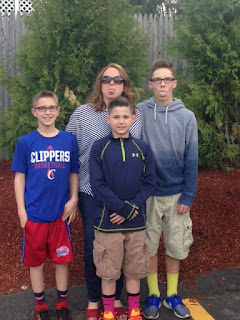 I didn't have any expectations for this yearly "holiday", which basically means I try not to do anything on that Sunday, and then spend the rest of the week paying for it.

Baseball was cancelled, so we had a (rare) day with no plans. But it was raining, and I was pretty sure there was no last-minute brunch reservation to be had in all of New England.

Homemade cards from the boyz were offered and read and laughed over. (These are by far my most favorite part of Mother's Day.)

The crockpot with the programmable timer (that I ordered for myself) from Amazon arrived. (Not that I planning on using it on Mother's Day, mind you!)

Hubby had made dinner reservations at a new restaurant in Rhode Island for the five of us, but when I looked at the menu, it seemed a little fancy expensive for 3 steak-eating boys who refuse to eat off the kids menu anymore.

Luckily, Hubby was able to find us something else at a friend's family's Italian restaurant at 4pm. Perfect!

On our drive there, the sun came out (for the first time in what felt like MONTHS!) We celebrated Mother's Day with calamari, mozz sticks, pasta, seafood and wine.

And then, while driving home, the poor sunshine-deprived boys asked if they could go to the ball field (because we're not there enough, apparently) to play. Now, normally, this wouldn't be my first eighth choice of what to do on a Sunday evening. But it was sunny! I'd had some wine! We were together as a family!

So go to the ball field, we did. All five of us, plus the dog, who was free to run around within the confines of the fenced-in field.

Two of Eldest's buddies were already there, hitting around.

Friends of ours arrived at the same time, with their three kids and their dog. Fortuitous timing without even planning it! 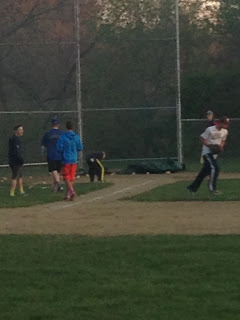 As the other mom and I stood in the outfield, with the dogs running around at our feet, it was so nice to see the kids being kids.  From 10 years old to college-age. Trash talk, laughter, encouragement...all without the use of any electronic devices whatsoever. No phones, no video games...just living in the moment. Playing old school pickup baseball.

I had flashbacks to my own childhood, when my siblings and I were allllllllways outside. (Until we heard mom's piercing whistle or the streetlights came on, whichever came first.) What the hell did we do without electronics?  WE PLAYED. 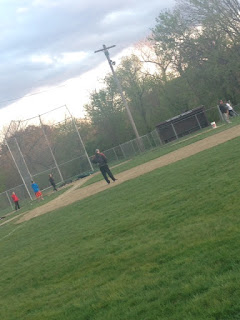 Needless to say, we were there for quite a while on that Mother's Day Sunday night.