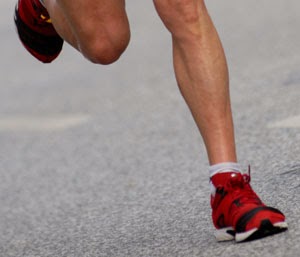 Since January, I have been training to run a half marathon on March 29th.  Even throughout the Snowiest Winter on Record this year (true fact), I ran outdoors when I could (rarely) and indoors on a dreadmill when it was too cold or too snowy (which was most of the time, it seemed).  I never knew I could run 7 or 8 miles on a treadmill.  How immensely boring, right?  But I did it.

I did a long run every Saturday or Sunday, increasing my mileage weekly.  I was actually starting to like not hate running again.

*****
I am one of those people whose coping method is to ignore or avoid.  For example, if my car is making a funny sound, I simply turn up the radio so I can't hear the sound.  (My husband LOVES it when I do this, trust me.)  If I can't deal with a person or a situation, I simply avoid at all costs.  It's what I do.

*****
I started having pain in my lower right leg some time ago.  It was when I was doing a lot of switching from treadmill to road, back to treadmill.  I figured it was perhaps shin splints (which I have had plenty of experience with from my high school/college soccer days).  With a few days of rest, the pain would subside a bit.

Until it didn't anymore.

A few weeks ago, I realized the pain was constant.  Yet I continued to lalalala ignore it.  Running was okay, because once my muscles got warm, it didn't really hurt. But it was the aftermath that was the hardest.  It got so that I would do a long run (I was up to 10 miles!) and then take a full week off because my leg hurt so bad.  Lalalala.

In my pea-brained head, I rationalized that I would try to make it through the marathon and THEN go see a doctor.  Because that is totally the smartest thing to do, right?  Don't answer that.

My poor body finally spoke up and yelled at me to CUT THE SHIT and GO SEE A DOCTOR, DUMBASS!  Alas, I went to my primary physician last week. My doctor (and I, deep down) suspected it was probably a fracture, so I was scheduled for a bone scan.  I was advised to be non-weight bearing on my right leg.  Meaning crutches.  LALALALA NOT LISTENING

The bone scan was on Friday.  Saturday I was called and told that it indeed indicated a stress fracture.

My appointment with an orthopedist is tomorrow.  At this point, I am COUNTING DOWN to go, it hurts that much.

Yuck..I'm so sorry :( I ignored some intense tendon pain in late January and ended up having to take a week off of my exercising due to a really huge, gross and PAINFUL swollen Achilles tendon.

Fingers crossed you are up and running again soon.

I'm so sorry for your pain.

Then I hope you visit a different one.

To running. Even if it's while you're dreaming for now.