Ok, so I am about 5 or 6 blog posts behind OMG.  It's not that I don't think about blogging.  Quite the opposite, in fact.  I DO think about it.  But actually typing something up?  Sooooo overwhelming lately.  I blame it on the season.  We'll go with that.

But today, while my heart is in my throat and my eyes are constantly on the verge of tearing up, I knew I should write well it's fresh.

My first baby, the child who made me a Mom, is growing up right before my eyes.  It's cliche, and corny, yes, but if you haven't yet been through it?  It's SO strange.

When I started this blog, Eldest was but a mere FIVE years old.  He's now THIRTEEN.  And the changes in him are coming fast and furious.  I swear he grows taller everyday.  (Although he's still pretty short compared to his classmates.)   He's quieter.  Deeper.  Sullen at times.  He babysits his brothers.  He gets firewood for the woodstove daily.  He makes his own meals.  He's wearing braces (and headgear at night). He does his own laundry.  He laughs and ugh, understands, adult humor.  He gets zits.  He's quick-witted and can fight back with sarcasm (much to my delight).

And when he kisses me goodnight (which he still does every.single.night), I pretend not to feel those stray scratchy hairs above his lip.

So now he's on his first official school team.  The middle school basketball team.  Where they either have practice or games after school 5 days a week (and hence, we lose our babysitter).

Today is his team's very first away game.  Which entails him staying after school, riding on a bus to the game, and then calling us to pick him up when he's back.  Wow.

It also entails a dress code for away games.  Pants, shirt, tie.  Ummmm...have you met my sons?  They are Sporty Sport Sport Jocks.  (I just made that up.)  It's all Under Armour/Nike/Adidas/Reebok/etc. etc. up in here.  New jeans go unworn.  Collared shirts hang futilely on hangers, gathering dust.  I fight all.the.time for my boys to wear "handsome" clothes and am met with COMPLETE resistance.

But now the tides are turning.  Suddenly I have one at an age where he's *required* to dress up.  And oh, how that makes this Momma's heart trill with delight.

It required us starting from scratch.  I was soooo excited to think about shopping with Eldest for some *real* clothes.  Yet my bubble was burst pretty quickly by Hubby, when he proclaimed that he would take his son shopping for dress-up clothes.  Dang it.

Last night was a vision I will keep locked in my Mother Memory Bank forever.  The two of them, father and son, standing in tandem at the bathroom mirror, with Hubby showing Eldest how to tie his tie.

All those years ago, when I complained both out loud to the universe and here on my blog about wanting to rush time?  Wanting to not have life be so hard with babies?   Wishing that they would just.get.bigger?

I take it all back. 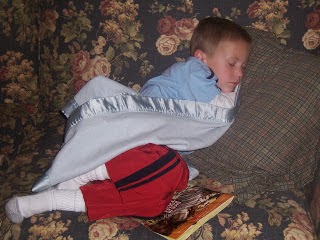 One of the very first pictures of Eldest that I posted here on this blog. 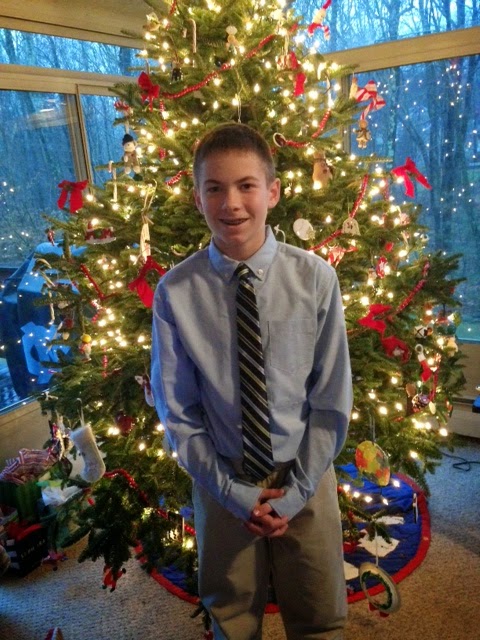