A Trip to the Theatre (With Boys)...Fantasy vs. Reality

I want my boyz to be well-rounded.  Meaning, it can't be sports sports sports all day, every day.  Which is what Hubby and my boyz would like.  Sports on TV, playing sports, wearing sports gear.  It's constant and neverending.  As you can imagine in a house with a plethora of testicles.

In order to facilitate my quest for a little balance, and to take a break from all the SPORTING SHIT, I bought the 5 of us tickets to the theatre in Boston to see A Christmas Story, one of our family's beloved Christmastime movie traditions.  ("Randy lay there like a slug.  It was his only defense."  "It it it was....SOAP POISONING.  AHHHHHHHH.")

I had in my head that it would be a shining memory of family togetherness.  Yeah, notsomuch.

Fantasy:
That all my children (and husband) would be sharply dressed in their pressed khakis and polos.  I would capture a perfect Christmas card picture.

Reality:
They wore jeans.  And sneakers.  And kept pulling on their necklines because ohmygah they were choking in a shirt that wasn't a sports jersey.  Mom is mean.  And pictures?  Nope.  Didn't happen.

*****
Fantasy:
That driving into Boston on a Friday night would be no biggie.  Traffic?  What traffic?

Reality:
There was traffic.  Lots.  And the "Are we there yet's?" were in abundance.

Fantasy:
Dinnertime in the city would be fancy and proper with my family and our family friends who were meeting us at the restaurant.  We'd take cute pictures of the 5 children all together, and perhaps have one of the kids take a picture of the 4 adults.

Reality:
Baby immediately dripped something on his shirt.  I chugged wine.  No pictures were taken.

Fantasy:
That the Groupon tickets I got for a bargain would miraculously be awesome front row, center seats.

Reality:
We were in one of the back rows of the orchestra section.  It was 102 degrees in the theatre.  These are the only pictures I took the entire night.  They totally look thrilled to be there, don't you think?  (Middle always takes nice pictures.  Always.  So he doesn't count.) 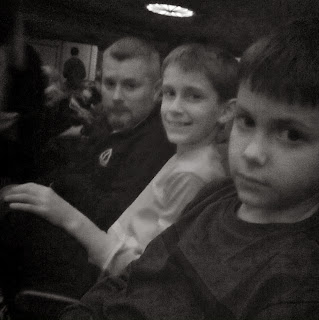 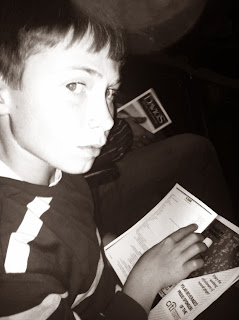 *****
Fantasy:
That the children would be rapt with attention throughout the show, their eyes sparkling with wonder.

Reality:
Someone had to pee.  Someone else had to pee.  They asked (repeatedly) when it would be "halftime" and oh, could they have a $10 snack?

*****
So my bubble was burst.  Actually, it was rudely popped.  It honestly wasn't that enjoyable.  And so the next time I get a great idea to buy the family tickets to something other than a basketball/baseball/football/hockey/lacrosse/etc.,etc.,etc. event, I need you to remind me to re-read this post.  Culture schmulture.

uhm a for effort??

and ps. i am sure one day they will thank you for the culture attempt, you know when they start dating :)

you need a niece or some god daughter ...