I posted back in the spring that I had "lost that running feeling" because crossfit has been my new mode of exercise.

I'm still doing (and loving) crossfit, but now that the boyz are at football practice every night for the month of August, I find myself with over 2 hours to kill every Monday through Friday evening.  (I know!  Alone time!  But more like, should be cleaning the house time!)

I figured since I do crossfit mostly in the early hour of the morning, that I shouldn't just sit on my butt eating Doritos at night, you know?

And the weather has been cooling down.  It's not so dang humid and soupy where you get cranky just stepping foot outside because you immediately have sweat trickling down your butt crack.  Just me?

And then, two of my friends went and actually SIGNED UP for their first half marathon in the fall.  (I'm one who likes to talk about it more than I like to 1. pay and 2. run.)

So I bit the bullet and signed up for the same half marathon.

Next, I downloaded a training plan.  For my last half, I used the Couch to Half app on my phone.  I wasn't thrilled with my (slow) results.  This time, I'm using Hal Higdon.  The Novice 2 program, to be exact.

I also crowdsourced on Facebook for good GPS running apps, since I haven't had great luck with Nike+ or Map My Run.  It's a total headgame when you KNOW where your 1 mile marker is, but your running app has you at 1 mile about 3 minutes too soon.  And you want to scream and yell, "Quit f*cking with me you stupid piece of garbage.  I know I didn't just run a 7-minute mile and now I feel like you're mocking me!"  Just me again?

I was signed up for a race.  I had a training plan.  I had a mileage tracking app.  (I also sense that a shiny new pair of running sneakers are in my near future as well...)

All that was left to do was to BITE THE BULLET AND RUN.

August 1st was a good date to start. 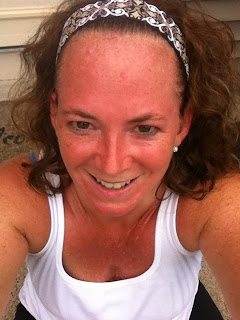 It just so happens that where the boyz practice football is the start of a (very hilly) 5k race route that I had run in the past.

Now, don't get me wrong, I'm pretty much starting from scratch, which is an ego blow.  A 10-minute mile pace, which used to be my slowest, is now my goal at this point.

But I'm out there.  Running.

And it feels good. 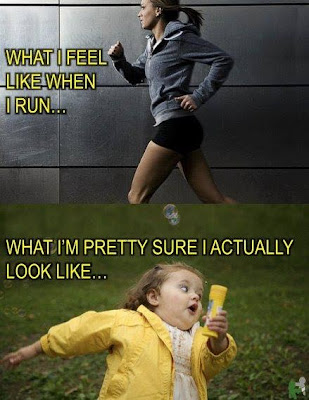