Baseball season has lasted foreverrrrrrrrrrrr.  Practices started way back in the spring, when there was still a nip in the air and either snow or muck on the ground.  Those first few weeks were a crapshoot whether the kids could even BE outdoors to practice.  Games in the beginning of the season were viewed huddled underneath blankets and coats to keep warm.

Regular season town ball play consumed the months of April, May and the beginning of June, with practices and/or games 2-3 days a week plus Saturday.

Mid-June brought relief in the form of sunshine and FINALLY BASEBALL WEATHER just as the regular season ended.  But oh no, we didn't stop there.  Next, it was on to All-Star season.  A season again in which Eldest made the team and Hubby was the coach, for the 3rd straight year in a row.

Except, whereas in the past years, there was much joy in the form of WINNING, this season was a much tougher one for the now-11 year old team.  As 2-time State champs, they had a target on their backs.  Other teams wanted it.  Opponents were catching up (and often beating them) in speed and skills.

Needless to say, this season was frustrating for the coaches.  Especially the Head Coach, with whom I happen to live.  TRUST ME.  Games were lost that should have/could have been won.  Tears were shed.  Strikeouts were had.  Balls were dropped.

All-Star season consists of scrimmages and tournament play, all leading up to Districts, then States in mid-July.  The team did NOT put in a good effort in Districts and could have been eliminated right then and there, but fortunately, this year, all the District teams were eligible to play in the Western Mass State tournament.

The State tournament took place this past weekend.  Again, the team had a bullseye on their backs, since they were the 2-time State champs.  The top team in the State tournament has the honor of advancing to the New England Regional tournament, which we were able to do in 2011 (in Bethel, CT) and 2012 (in Danbury, CT).  [Aside:  Our town plays Cal Ripken baseball, not Little League baseball.  They are two separate and distinct leagues.]

So there were 6 teams vying for the Western Mass state championship.  Our team played each of those teams once, and at the end of the tournament, their record was 3-2, tied with two other teams.  (They were 1-2 going into Sunday, but managed to win BOTH games on Sunday!) The top team was 4-1.  In order to break the 3-way tie for second seed, the tiebreaker was least amount of runs given up for the 5 games.  Guess who that was?  Yup, our boys.

So here they were, yet again, playing for a State Championship THREE-PEAT on Monday night, for a chance to attend Regionals (a third time) in Dover, NH. 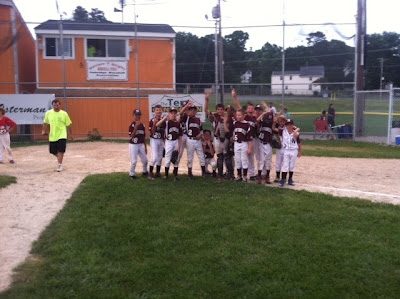 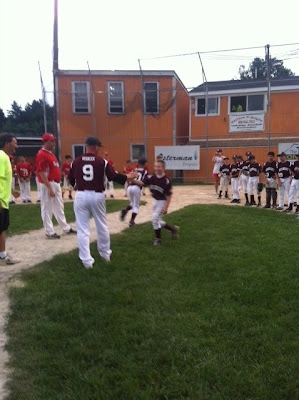 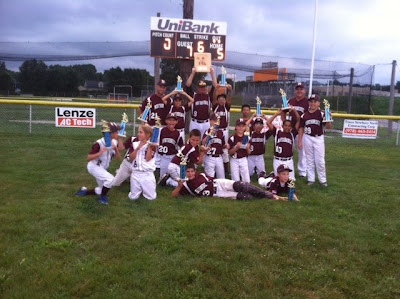 We head to Dover, NH for the first game of New England Regionals next Saturday, August 3rd.

P.S.  Did I forget to mention that FOOTBALL starts August 1st?  No rest for the (very) weary.