So as I've mentioned numerous times, we are in the thick of All-Star baseball season here in the Trenches, with not one, but TWO boys playing on teams this year.  PLUS Hubby is the head coach of Eldest's team, as he has been for the past two years.  This means that we are often running in separate directions, with poor Baby being schlepped along for the ride.

Well, Eldest has been in somewhat of a hitting slump.  Which makes his coach/father extremely agitated, as it's definitely mental and notsomuch physical, because he *can* hit the dang ball.

Saturday saw us in two different places, as usual.  While I was chaperoning Baby and his friends for his birthday celebration (at an indoor trampoline park!  fun!), Hubby and Eldest were off at (yet another) baseball scrimmage.  When I received a short text from Hubby that Eldest had struck out 3 times that game, I knew that there would probably be strife to come.

Once back at home, Eldest definitely seemed defeated with his miserable at-bats.  He moped around for a little bit, but then seemed to get over it (as he usually does, thankfully).

The next morning, he informed us, "I may have had a bad hitting day yesterday, but it wasn't as bad as someone else...I just saw on SportsCenter that Mike Napoli had four at-bats and struck out all four times.  His day was worse than mine!"

Hubby, being the good coach that he is, explained to Eldest that see, even professional ballplayers have bad games but don't let it get them down.  They go back the next game and keep trying.

Monday was another baseball practice night.  While I was with Middle at his practice, Hubby and Eldest were at the indoor batting cages with their team.

It seems that Hubby was doing the pitching to all the boys on his team.  His only protection from the balls being hit back to him was a net screen that he was standing behind to pitch.  Eldest was up to bat and not doing well.  In frustration, Hubby said he yelled to him, "Will you just HIT THE BALL HARD?! You're not even swinging the bat!"

Eldest RIPPED IT.  Right back at his father/coach. 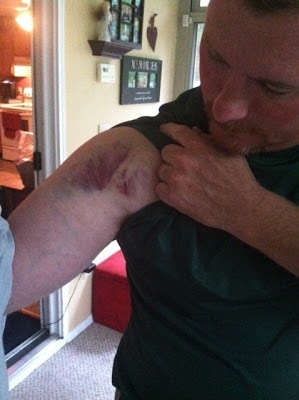 Here's hoping his hitting slump is over.