Isn't it horrifying, that first realization when your child does something or acts a certain way, and you realize, "Wow, he gets that from me."

I swear, our worst character traits are manifested in our children.  Don't you think?

For example, all throughout my childhood, and even now still, I don't really like to try something new.  Something that I know I won't be good at right away.  I hate the learning curve.  I want to master the task/skill/activity INSTANTLY.  Or else I don't wanna do it.

When I was a junior in high school, my parents told me I could drive the family Volkswagon Rabbit.  Except it was a standard shift car.  That I didn't know how to drive.  Do you think I learned?  So that I could have my own car?  Nope.  I tried it once.  Stalled it many many many times, and then quit.  And never tried to drive a stick shift ever again.

*****
My Eldest is much the same way.  He's a perfectionist.  He likes knowing what to expect, and he likes excelling at everything he does.  If he knows he won't be able to do it well, he doesn't wanna do it.

Perfect examples for him:  lacrosse and ice skating.  We told him he could play lacrosse AND baseball (going against our ironclad 1-sport rule) for just one season, and then he'd have to pick.  He's very much intrigued by lacrosse, and would be good at it, but he's never played before.  Every year he says he thinks he'll try, but then he backs out.

Ice skating in the winter totally frustrates him, especially as his brothers seem to zoom circles around him.  The ice capades usually end with him crying tears of frustration and slip sliding (and falling) off the ice.  Every.single.year.

I totally see myself in him.

In Baby, I see my lack of self control.  It manifests itself in me with my eating, and my spending habits.  If there is chocolate in the house, it's not long before it's in my belly.  I seriously avoid buying the ice cream flavors that *I* like because I won't be able to resist.

Same with money in my checking account. If I know it's there, I want to spend it.

Baby totally shows my same lack of money savvy.  He vigorously wiggles his teeth, hoping they'll fall out so he can get tooth fairy money.  And once he has that $5 in his paws, it's a nonstop barrage of "Can we go to the store now?" so he can spend it on cheap shit.

And the lack of self control, in him, comes out physically.  He will throw a hit or slap at his brothers without thinking about the consequence.  He will backtalk before he can stop himself.  He's instantly sorry afterwards, of course.

And then there's Middle.  Middle with his love for art and music and creativity.  Middle who doesn't really like to get dressed on weekends if he doesn't have to.  Middle who will shoot the basketball for hours, or play catch by himself on the side of the house.  He's much more sensitive than his brothers, and much more likely to be found alone than the other two.

Yet he's like me in the way he loves all things pop culture.  I mean, c'mon, there's not a Real Housewives I haven't watched.  There's not an awards show that I'd miss.  There's not a People magazine that I wouldn't read.

Middle knows every word to every song.  He knows who sings the song, and what other songs they sing.  He wants to see the new Will Smith movie for his birthday.  He wants to go to the Big Time Rush/Victoria Justice concert this summer. 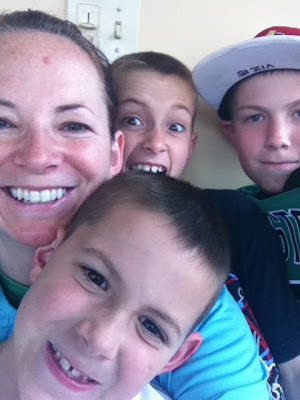 Uh yes to this. Though John hates it when I point out when of his characteristics that one of our children is showcasing so brilliantly.

Right now I am working with my oldest because she has such little tolerance for people (primarily stupid and annoyng people). I am trying to show her that even stupid and annoying people have a place in our world. It's hard. And that we need to be gracious to them. She's not buying it.