I believe I've mentioned here before that Hubby is on the Surgery Every Year plan.  Knees (both!), his shoulder, and now, his NECK.  And that's not even counting the emergency appendectomy, or the other various aches and pains he experiences all.the.time.

(I joke that I'm gonna trade him in for a newer model.  Or take him out back and put him down.  Either one, really.)

So, combine my "I'm soooo not the nursing type" mentality with my lack of experience or empathy regarding any type of surgical procedures (except the aforementioned c-sections, which, I'd like to see a man go through THAT mwah ha ha), and Hubby is pretty much on his own.

His neck has been bothering him since January.  He started physical therapy in February, and after fighting with our insurance company, also got an MRI in February--which showed the herniated disc in the C5-C6 area.

We finally got in to see a surgeon a few weeks ago.  And surgery was recommended.

It's an overnight hospital stay because they go in from the front, THROUGH his neck.  Ewww.

The surgery is less than 2 hours.  Afterwards, he won't be in a neck collar and won't have to have physical therapy.

I was adamantly against him having surgery.  Still kinda am, but he's in obvious pain.  And physical therapy and/or cortisone injections are just simply short-term bandaids.  I get it, BUT STILL.

The recovery is 2-6 weeks.  Baseball will take a backseat while he is bored and cranky recovers at home.

The surgery is scheduled for May 9th. 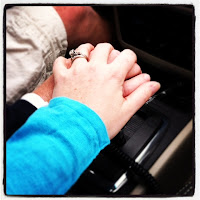 Through his neck? *shudder*

Surgery is scary! But sometimes necessary, as in this case. Praying that all goes well!