Sorry for the radio silence.  Sometimes I just have so much to say that it's just easier to not say anything, you know?  A day will go by and I'll think, "I should write today...." and then another day passes, or two or three, and my rational mind shrieks, "Write it down!" but my heart whispers, "Writing will jinx things.  Just hush."

I'm not sure exactly when I hit rock bottom, but what stands out most is my 40th birthday pictures.  I hated how I looked in them.  I hated even more how I felt.  My yearly physical confirmed what I was subconsciously burying:  I have gained 17 pounds in the past 2 years.

And it seems like once I hit the not-so-fabulous 4-0, my physical problems seemed to exacerbate.  My legs were swollen at the end of the day.  Like pregnancy, water-retention swollen.  And at night, I had TERRIBLE night sweats.  Like needing to have the windows open in 20 degree weather.

I was exercising though.  Exercising has never been an issue for me.

But my eating?  I had forgotten how to eat PROPERLY.  My meals were not consistent.  I was not making good, healthy choices.  I was going long periods of time without eating, and then devouring an entire bag of chips.  My portions were out of control.  And I was drinking wine or beer on the weekends (plus one or two weeknights, it seemed.)

And then, I got an e-mail from my former trainer in late February, asking me if I wanted to take part in a "Springtime Detox Challenge to cut out any and all processed foods" and that she knew I "could do anything for 7 days!"  Rah rah rah, etc. etc. etc.

I so badly wanted to say a big fat NO.

But I said a teeny small yes, and continued to eat and drink my face off waited for further instructions.

****
My Detox week started last Thursday, March 21st.  Early that morning, after my morning workout class, I went to my trainer to be weighed and measured.

Days 1-3 of the Detox are eating the exact.same.foods every day, for every meal and snack.  I liked that everything was spelled out for me, portion-wise and meal-wise.  I was even provided a grocery list and recipes.

I was having a protein shake (old fashioned oats, protein powder, berries and water) for breakfast; 2 hard-boiled egg whites and an apple for morning snack; long grain wild rice and black beans for lunch; spinach salad with veggies for afternoon snack; and haddock or shrimp with stir fry veggies for dinner for those first 3 days.  And just water to drink.  ONLY water to drink.

ONLY WATER TO DRINK.

AND NOT FLAVORED WATER EITHER.

No coffee, no tea, no soda.

My first cheat was lunch on Friday.  I had a work lunch.  So I ordered shrimp and veggie stir fry with brown rice. (That is, after frantically texting my trainer to make sure that this was acceptable!  See?  I told you I seriously lost all capability when it came to making proper food choices...)

Breakfast was 1/2 grapefruit and a protein pancake (pretty much as gross as it sounds, but surprisingly filling); morning snack was egg whites with spinach and peppers; lunch was grilled chicken and steamed green beans and sweet potato and an orange; afternoon snack was more sweet potato and 2 hard-boiled egg whites.  And dinner was a choice from 4 different chicken/pork recipes.

My second cheat was on Saturday night.  I had one Michelob Ultra Beer.  (Which is basically just water anyways, right?!)

Other than that, I didn't cheat.  I stuck to it. I liked that there was no THOUGHT involved about food.  I just ate what I was supposed to, when I was supposed to.  This just works for me, for some reason.

Exercise-wise, I did Crossfit on Friday, and again on Saturday.  I rested on Sunday.  On Monday I did Crossfit in the morning and played soccer at night.  On Tuesday I took a workout class.  On Wednesday I ran 5k.

So yesterday was my weigh-in.

Driving there, I was mentally preparing myself for yet another disappointment on the scale.  Nothing I had been doing in the past 2 years had worked.  (Granted, I never STUCK WITH anything though.)  I was going to be *fine* with a one or two pound weight loss for the week, as long as I had also lost inches too.

I stepped on the scale.

And almost peed myself when it showed a 6.4 POUND weight loss.

Not only that, I lost almost 9 INCHES from my abdomen.

And lost inches on every other single part of my body that she had measured as well. 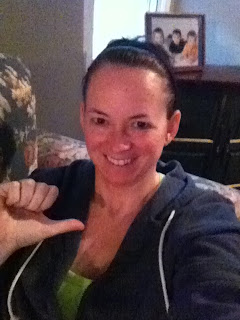 So did you notice what foods and food groups were missing in the Detox?

No packaged foods.  No processed foods.

My leg swelling?  Gone.  Night sweats?  Haven't had any.

I left my trainer (with a perma-grin on my face, mind you) and went immediately to the grocery store.

To stock up for the Detox for another 7 days, starting yesterday.

I need to do a detox again. They really do work!

Congratulations! You are AMAZING :)

That is seriously exciting!! Way to go you!!

i can't even tell you how happy i am for you!! seriously friend, so impressed!!

our 30 days were up yesterday and we indulged. and then hubby and i bottomed out and felt like crap. i am truly starting to believe it's just not worth it....