You guys, he is going to be the DEATH of me: 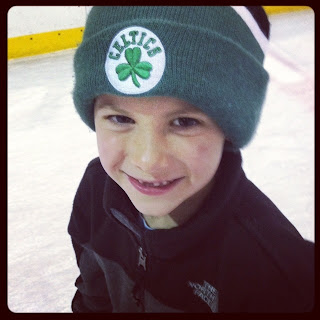 So Hubby and I go to his parent-teacher conference.

We already knew that he had his teacher wrapped around his little finger, as evidenced by his flawless report card with good grades and positive comments like:

"Shows self control.  Is a good listener.  Pays attention.  Respectful to others."

What?!  Because, at home, in our Trenches, this kid does exactly the opposite.

We actually had to STUDY the report card to make sure that it was talking about OUR CHILD.

Anyway, as we were walking out of the classroom, basking in the afterglow of the teacher's comments about our wonderful son and feeling like Parents of the Year, we noticed a series of projects in honor of the Presidential election.

Each paper had a picture of a child wearing spectacles, with an American flag waving in the background and the beginning sentence, "If I was President..."

Here was MY child's project, hanging on the classroom door for ALL to see: 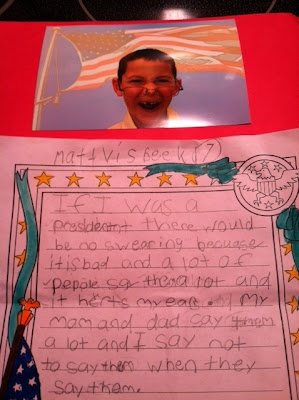 I don't think I even need to tell you that we really are pretty conscious about not swearing around our three children that much.  FOR THE RECORD.

At Open House this fall, when asked to write about what his favorite thing to do was, Baby wrote "to play calla dooty".  (That's Call of Duty.  A violent shooting game that we DON'T EVEN OWN.)

Oh hi teacher who now thinks that we let our children play bloody video games while we cuss at them.

P.S.  His teacher is getting a REALLY NICE Christmas gift.  Bless her heart.

I am no expert. I don't have kids. I only work in a child care center. I hear this all the time. I am wondering if he is working so hard to hold all together at school he just goes cuckoo at home. =) That isn't meant to sound preachy it is the only explanation us teachers can give you guys who want to pull your hair out.

That is seriously funny! While my son has not accused us of swearing, he, too, gets report cards that make us question if the teacher has sent the correct report card home!

But he is sto stinkin' cute.

Just keep him away from my daughter until they have both graduated college!

OMG - I LOVE this.. soo funny! We had a similar thing where my daughter was talking to her teacher about her summer camp and told her (african american) teacher that her favorite part was all the "black people" at the camp. They were so much fun. We had to try and explain to her teacher that the "black people" - were the black team - what the called the counselors at her camp - and not a physical description! LOL

lol! Looks like he knows how to get people's attention!

Ha! Too funny! My son does and says stuff like this all the time.