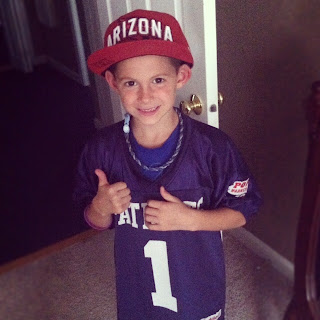 He liked "da red bird team".  And then, as he got older, it was the "Cawdinals".

Thus, everything the boy owns is Cardinals.  Cardinals jerseys; Cardinals sunglasses; Cardinals hats; a Cardinals necklace and multiple Cardinals tee shirts and sweatshirts and pj pants.  I think at one point there was a Cardinals backpack.  Oh, and there's a Cardinals pillow pet on his bed.  And he owns a real Cardinals football helmet.

He's jonesing for the Cardinals NFL bedding from Pottery Barn.

Did I mention he's only seven?  And that we are the crazy parents who buy all this crap?

Yes, it is kind of an obsession.

So you can imagine, then, when he heard that the New England Patriots were going to be HOSTING his beloved Cardinals team, it was like a dream come true for him.

Nevermind the fact that Boston professional sports are RIDICULOUS in the amount of cost, traffic and hassle (...but mostly CO$T!) it takes to attend an event.

And find them he did.

Then, we had to make the decision:  Should we pull the trigger or not?  It was hard to justify the expense, but it was also Baby's most favorite team ever and ever amen.  And it would be his very first (and probably last, for a longlonglong time, anyway) NFL game... 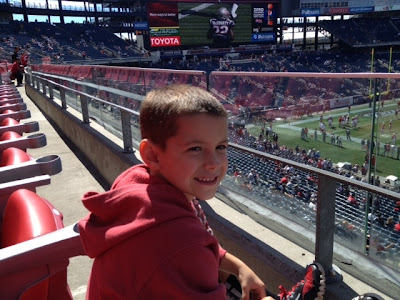 We pulled the trigger.

Father and Son shared a spectacular day and a phenomenal experience together.

And Baby was probably the only person who left the stadium thrilled beyond belief, for his Cardinals pulled out an upset win over the beloved hometown Patriots. 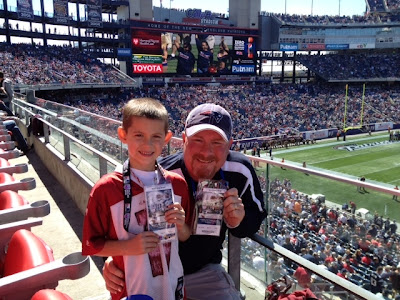 Totally worth it for that smile!!

He is about the cutest thing to wear a St.Louis Cardinal's jersey ever.