The Boys of Summer

While I haven't necessarily been writing about baseball, I certainly have been living (ie., eating, sleeping, BREATHING) baseball these days.

Yes, it's All-Star Season once again.  Hubby is again coaching, and Eldest is again on the team.  This year, they are the U10s.

Last year, baseball season stretched into football season with a trip to Regionals in Connecticut.

This year, they are well on their way, going undefeated by winning a come-from-behind game in the bottom of the sixth to win the District tournament (and giving all us spectators on the sidelines plenty of heart attacks in the process...) 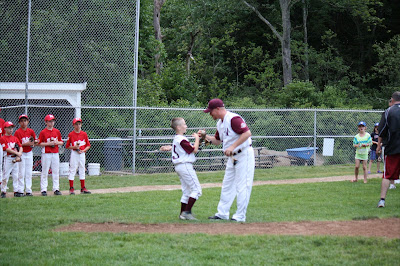 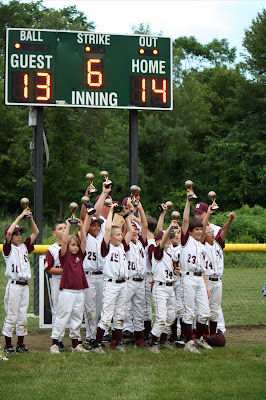 Up next?  The State tournament this weekend.  They must win that in order to advance to the Regionals in Connecticut again.

Uhhh, our annual Cape Cod vacation is scheduled for the week of Regionals.

(Ok, I'm thinking about it.  Do I take the 2 younger boys alone to the Cape?  Do we go as a family to Connecticut and miss some of the days of our ALREADY PAID FOR Cape vacation?  Is that fair to the 2 little boys?  Will I feel guilty either way?  Is it silly to even think about it because they may not win anyway and then it's a moot point?  But what if they DO win?)

Oh, and did I mention that Middle is ALSO playing summer league baseball?  His games are every Tuesday and Thursday through the entire month of July...