So...yeah.  I honestly had NO IDEA that the half marathon I'm running is NEXT WEEKEND.  That whole  "turn the page of the calendar to the next month" totally threw me off, apparently.

(It was totally mental.  I just STOPPED RUNNING.)

So I feel like I need to do at least do one more long run, hopefully this weekend.  And then I will take it easy next week with a few 3 or 4 mile short runs.

And then wake up next Sunday at the ass crack o'dawn and run 13.1 miles with these two lovelies: 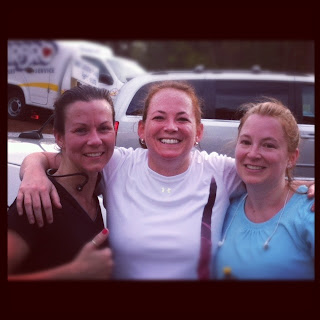 This will be my third (!)  half marathon, but I actually feel like a newbie all over again, since my first was back in 2007 and my second one was in 2010.

I'm excited.  Nervous.  And hoping I am mentally strong enough to plow through.

I gotta know, though, have you lost any of your toenails with these long runs? That's my fear (and my reasoning for not running over a 5K).