What kind of "mommy blog" is this anyway?  She barely writes about her children anymore!

Were you thinking that?  Oops, my bad.

So here's a good story for you about Middle.

Poor Middle.  It's tough to be the Middle.  Especially when you are the stereotypical middle child.  Which he SO IS.

Starting from birth, really.  Colic and reflux?  Yep, that was Middle.

Someone has a bloody nose?  It's Middle.  (Our appointment with an Ear/Nose/Throat doc is tomorrow for his constant GUSHER nosebleeds.  And yes, he's already been cauterized.)

Someone got hurt in a roomful of children playing?  It's Middle.  (Remember this incident?)

Someone needs INTERCEPTIVE ORTHODONTIA at age 7?  It's Middle.  (Our first appointment for THIS is next week.)

He's the child who always draws the short straw.  Yet he's our go-with-the-flow one.  The one who loooooves days when he can just wear his jammies and not have to go anywhere.  The one who spends long lengths of time making silly faces at himself in the mirror.  The artistic one.  The goofy one.  The airhead. 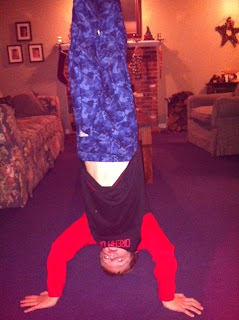 He was in a standing-on-his-head phase just recently.
With Eldest and Baby having such STRONG personalities, I feel like Hubby and I often tend to short-change Middle.  Not crediting him enough for his smarts (which is constant); for his good behavior (which is pretty much constant); and I feel like we especially overlook his athletic abilities when comparing him to his brothers (especially in football).

But this winter, Middle has grown and developed and blossomed as a basketball player.  You guys, no matter what the weather, this kid spends hours outside shooting hoops.  All by himself.  All bundled in a winter coat and gloves.  Sometimes sporting sunglasses.  Hours. 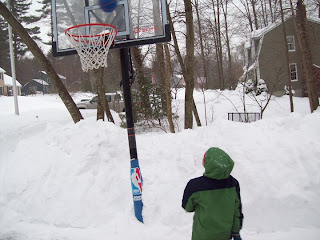 He and Baby played Rec League basketball this winter on the same team with all 1st and 2nd graders. Hubby and I had made the decision to let Middle play down with kids his age, instead of moving him up with an assortment of 2nd, 3rd and 4th graders.  My rationale was that I wanted him to have a chance to shine.  To let him be in the spotlight.  To excel.

One game, Middle scored 20 points!  (Much to Baby's chagrin...for the sibling competitiveness is FIERCE here in my Trenches.)

So last night was the boys' final game of their Rec League basketball season. Middle and Baby's team was undefeated.  (Not that they keep track, of course...) (BUT OF COURSE THE KIDS ALL KNOW!)

Earlier that morning, Middle had informed Hubby that he was going to try to shoot a 3-pointer in his last game for a game-winning shot.  Sure 'nuff, he tried for a 3, although it was early on in the game.  It actually hit the rim, which was kinda impressive.

And as far as the game-winning shot?

OH YES HE DID.

I cannot believe we didn't get it on video.  It.Was.Awesome.  The game was tied 14-14.  The other team was psyched because they knew we were undefeated and they had the ball while time was running out.  (Keep in mind though that these are 6 and 7 year olds, so I'm likely embellishing.  Who knows what they were actually thinking about.  Probably squirrels.)

Middle reached out and stole the ball with 10 seconds left and dribbled it down the court and SUNK THE SHOT as the buzzer went off.  A real, true BUZZER BEATER.

As soon as it happened, while both teams were congregating in the middle, Middle came over to his father and me on the bleachers and collapsed in tears.  Tears of happiness.  Tears of excitement.  His poor little heart was beating a mile-a-minute.  Neither Hubby nor I had ever seen this reaction from any of our children before.  We so weren't expecting such keen emotion.  It moved both of us.

Again, I cannot believe we didn't get it on video.  That moment was simply priceless. 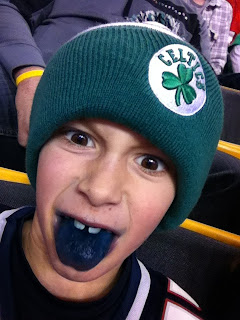 And this right here is why I keep coming back to read your blog everyday. You literally could have written this about my middle son,literally. I'm not a blogger but I love blogs. I love reading about others going through the same exact things as me. Totally makes me feel like I'm not in this alone, and I'm not crazy. I'm so glad you didn't give up on your blog!

So sweet! I can't believe you didn't get it on video!

I am always worried that middle is getting the short end of the stick. It is not easy being the quiet one sandwiched between two drama queens

Oh man. I don't even know Middle. But I love him. Oh, and my middle sister (and middle child) are nothing like your middle. So maybe it's a girl thing?

Tears were streaming down my face as I read this.

Yeah Middle! He is awesome.

That is so sweet! I wasn't expecting that part. I was teary-eyed after reading it.