Oops.  I realized I haven't written here in a few days.  But folks, I got nothing.

And so?  You get random: 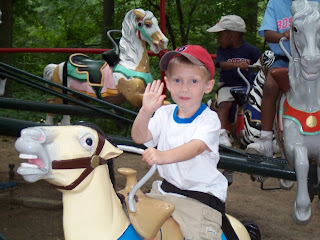 I blinked...and then he was turning double digits.  Hold me.
--We had Open House this week.  I was actually kinda scared of Eldest's fourth grade teacher.  She's pretty umm...old-school.  Didn't crack a smile and had zero personality.  That being said, though, I think he's gonna have a great (but tough) year.  Which is exaaaaactly what he needs--to be challenged.
--Middle is quite a gymnast.  He is constantly either (a) walking on his hands or (b) seeing how long he can do a headstand.  I swear, he's upside down more than he is rightside up.  He is required to read every night for second grade homework and I LOVE it. 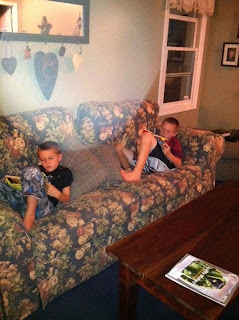 Makes a Momma's heart proud
--And Baby, well, Baby is Baby.  Only 6, but thinks he's 16.  Street-wise and tough.  Lighting it up on the football field.  He's only one of three returning players, and with two older brothers, he certainly is no stranger to roughness.  Needless to say, he scored FOUR touchdowns two weeks ago and then another two more last week.  He's really fun to watch.  Especially because he's STILL just about the smallest one out there. 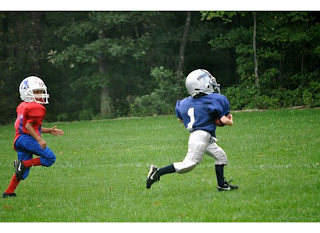 ...And he's off!
And me?  I have finally gotten my (fat) ass in gear and have been running again in the mornings.  I realized that I simply cannot do it alone.  So I suckered recruited some gal pals to join me in my early morning craziness.  I run with Eileen on Tuesdays and Thursdays and with Shaunna on Wednesdays.  And this morning I ran with Laurie.  Four mornings in a row!  This really works for me.  To know someone is waiting for me.  To be held accountable.  Because if not?  When that alarm goes off at the ass crack o'dawn?  I simply shut it off and get right back to snoozing.  Which is exactly why I hadn't run since early August.  And so, I'm starting to feel better.  Physically and even mentally.  Running is just so good for me in so many ways.
And finally, If I'm not running or at work, I'm here: 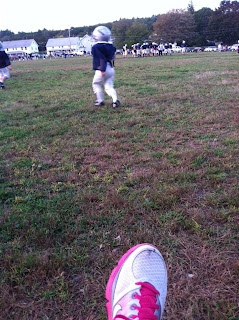 At frigging football practice being eaten alive by mosquitos and thinking of all the things I could be doing back at my Trenches while my butt gets numb
--And the winner of the crockpot giveaway is....(drum roll)...Emily!  Happy cooking, my dear!
Have a great weekend everyone!

Congrats on the getting back to running!

My daughter wants an iTouch too. I'm pretty sure she will get it as well.

I need to do something to get my ass back in gear, too! My personal trainer moved away, and I'm definitely missing that extra motivation she provided. Maybe it's time to find someone else to kick my butt!

I am SO over mosquitoes. I can't stand it ANY LONGER!