The Half Marathon That Wasn't

Yesterday, I was scheduled to run a half marathon with my Sis that I had paid $70 for back in the spring.

All April, I trained in anticipation of this run.

And then I hurt my knee.  (Insert a plethora of swear words here please).

The diagnosis was a sprained LCL.  To rest it, ice it, and Motrin it.

Which I did, but not consistently.

And I kept trying to run on it.  Not the best idea I've ever had, I realize, but I'm stubborn.

It did me no good.  Making my recovery time much longer, in all likelihood.

So there was no way I could participate in yesterday's half marathon.  That I had signed up for and paid $70 for.  (Oh, did I already mention that?  $70!)

But my Sis did. 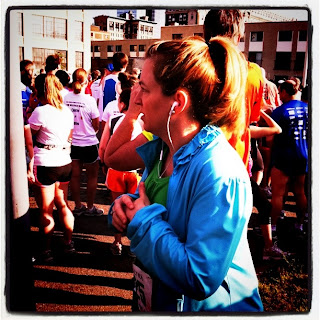 And I was there to cheer her on.

You guys, it killed me to not be running that race alongside behind her.

But it was kinda cool to be a spectator.  To have my belief reinforced that ANYONE CAN BE A RUNNER.

Just go to the finish line of a half or full marathon and see for yourself.

Old or young.  Fat or skinny.  Even barefoot. 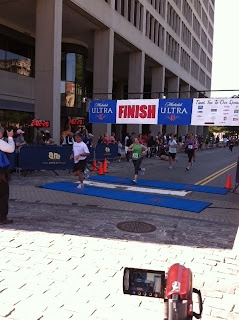 Who finished it in 2:02, despite having (foolishly) played soccer the day before and used muscles that hadn't been used; despite already having pre-existing gnarly blisters; despite having a Nike Plus that was calibrated wrong all spring and told her that she had run 14.28 miles at the end of the half, instead of 13.1.

I plan on being right there ALONGSIDE her.
Posted by Sarahviz at Monday, June 06, 2011

I never knew that you had to pay to run in a race. Interesting! Good for you that you went to support your sister. I bet you'll be right next to her the next time around!

Next time you'll do it! But, take care of yourself in the meantime!

excellent job for her. sorry that you were injured - such a hard thing to deal with. hope you r better soon.

Was that the Worcester Half Marathon? I ran that race last year and had a good time!!! you will definitely be back, just take care of that injury...

Totally understand the pain thing & the frustration, but that is part of being a runner, which you now totally are!

What a great time she posted!

Hang in there...it will get better, but it is frustrating to be sidelined!

Your sister had a great time.

The first race my hubs ran I had ran 5 years in a row then the one year he runs in it I tore a ligament. So I couldn't run it. But it was so great to watch him run across the finish line. I was so excited and proud.

Good luck next year when you both run it.