As the page of the calendar turned from April to May, I found myself in a panic.

Who has two thumbs and signed herself up for a half marathon on June 5th?

So did I mention that I panicked?

Oh, and then proceeded to do nothing about it.

I mean, my April mileage was good.

But by Mother's Day on Sunday, I had not yet gone for a run in the month of May.

So as a "gift" to myself (said with heavy sarcasm), I went for a loooooong run.

And then had to walk an additional 2 miles to get back home.

(Because apparently I can't do math and run at the same time.)

But it felt good.  I mean, I was definitely sore the rest of Mother's Day, but nothing unusual.  And then I took the day off on Monday.

So by last night after work, I was itching to run again.

I had in my head I wanted to do 6 miles.

But as soon as I started out, I knew it was Not Good.

My right knee was in terrible pain.  I have NEVER EVER had knee pain before.

Which brings me to the second part of my story.

Wanna know why I have knee pain?

Because karma is a bitch.  That's why.

You see, Hubby has been gimping around all spring.  He already had knee surgery on one knee back in 2006.  Now the other knee has something or other torn (all I hear is blah blah hurts blah blah doctor blah blah surgery) and requires arthroscopic surgery - which he will have done early this summer.

And so, because I am such a loving and caring wife, I have been doing nothing but making fun of him and his frigging hurt knee. 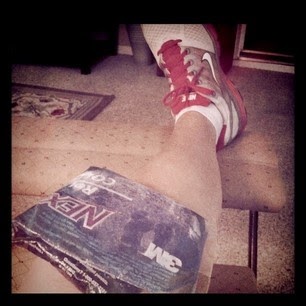 I tried to run this morning, fooling myself into thinking that maybe it just needed to be stretched.

No dice. I could barely lift my knee to run.  However, riding the stationary bike was fine.

But now?  I pretty much have a dead leg and am dragging it behind me.  Sweet.

I'm not gonna try to run again until Sunday.  And in the meantime, I will do ice/Advil and start thinking about a knee brace.  I'm hesitant to go to the doctor if it's just something strained or pulled.

Crud. That stinks! That is the reason why I don't run, pain. Oh, and I hate to sweat. You are a better woman! I hope your knee feels better soon!

Niggles turn into injuries. Go and see a professional now. Could be something as simple as needing new shoes or some exercises to build up certain muscles. Go now. Masking the pain doesn't help.

Running injury, or is getting old a bitch? :-) Also, my knee hurts on a regular basis, and I wouldn't run if my ass was on fire....

{crossing my fingers that it's from running}