Put Me In Coach, I'm Ready to Play 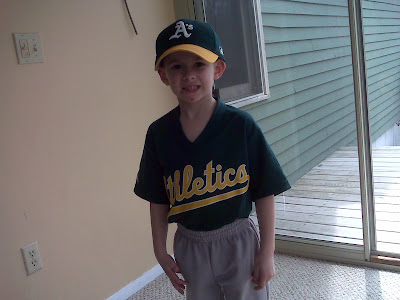 See this little buddy, all spiffy in his gear, ready to play ball?

Uh, yeah.  Except he's not playing ball this year.

This season, Eldest is in the AAA league for baseball.  Middle has moved from tee-ball to AA ball.  And Baby?  Still stuck on tee-ball (imagine watching paint dry, but worse) for another year.  So he decided he didn't want to do that (with no objections from either of his parents).  So Baby is "helping" Hubby coach both Eldest's AAA team and Middle's AA team.

This past weekend, uniforms were handed out to Eldest's team.  Baby CRIED when he realized that because he's not playing ball, well, there would be no uniform for him to wear.  So guess who is now the official bat boy for Eldest's team?

(He wore that outfit for 2 days straight.)

(And still harbors hope that Eldest's team just miiiight be short a player one time and that he'll get to go into the game.  At 5 years old.  Playing with 9 year olds.)

*****
Apparently at one of the practices this weekend, as Baby was "helping", he made an awesome diving catch.

Whenever one of the boyz makes a great catch, Hubby always calls it a "Top 10 Play."

They love that segment on ESPN.

So the other night, when Top 10 Plays were on the tv, Baby earnestly asked, "We better watch for me!  Daddy said I had a Top 10 Play!  I'm gonna be on here."

He truly thought he would see himself on TV making that diving catch.

*****
Saturday afternoon, we were all watching the Masters.  I was half-watching while playing with the iPad.  Tiger Woods flubbed a shot, and of course the camera panned right to his face as he grimaced and said, "F*ck."  Nice job, cameraman.

Hubby nudged me.  "Did you just see that?"

From Baby with an innocent shrug:  "He just said f*ck.  That's what he said."

In all fairness, Hubby did ask, right?

*****
My 5 year old Baby.  Who is 5, going on about 15.  He's savvy and street smart and wayyyyy too wise beyond his years.  There is nothing innocent about him, except for his wittle round baby face and chicklet baby teeth.

He so wants to be a big boy.  He so wishes he were older.  He so TRIES to be such a big boy.

This youngest child of ours is definitely going to give us a run for our money. 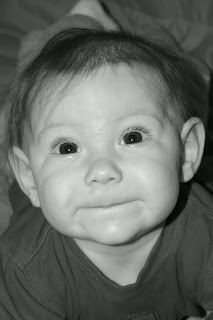 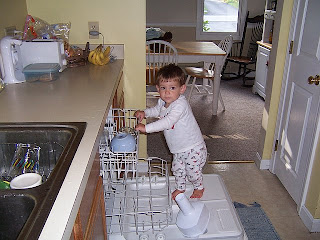 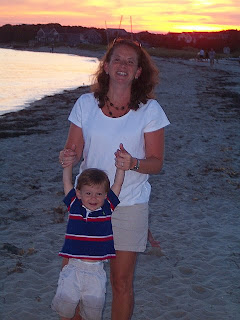 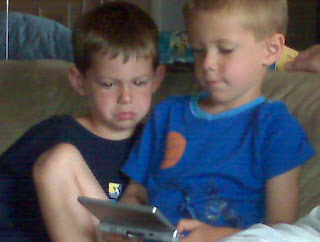 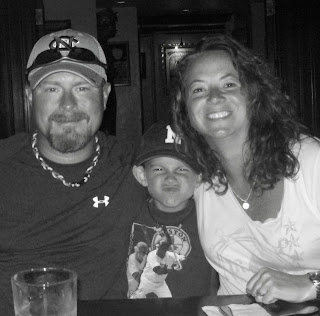 Great story, Sarah. I can so relate to the "baby" wanting to grow up too fast!

Last pic is my favorite!

The baby never wants to be the baby.

I think that is sweet that he got a uniform and gets to be a bat boy.

What a handsome family and a terrific story.