Have I mentioned before that with 3 boyz, absolutely everything becomes a competition?

(Hey, I never said it was necessarily a bad thing...this competitive drive of theirs.)

Middle has taken it to the extreme.

You see, once Middle started losing his baby teeth, it then became a competition to "catch up" with Eldest, who has lost 8 teeth thus far.

I swear the kid has been yanking out his teeth, left and right, all in the pursuit of reaching 8 teeth lost JUST LIKE HIS BROTHER.

I mean seriously, look at him (but please ignore the donut remnants on his face): 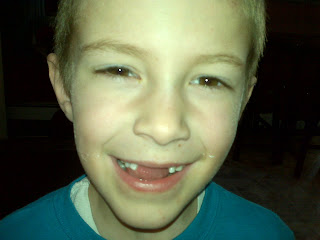 But Middle wasn't yet done - oh no he wasn't!  That right side upper tooth didn't stand a chance, for it was lucky number 7 to be lost this weekend. 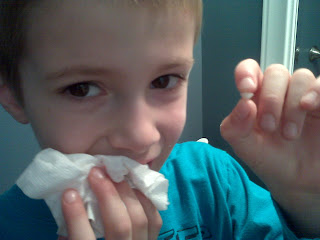 I mean, the child has absolutely NO FRONT TEETH with which to chew his food! 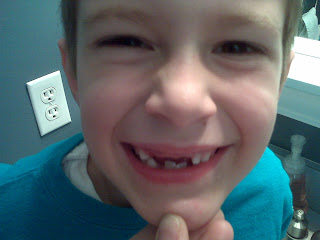 I'm thinking I need to buy stock in applesauce.
And then we have Baby.

Baby, who pouts each and every time Middle loses a tooth, because he wants to lose one too!  And it's NO FAIR.  And WHY CAN'T HE?  And when is it HIS TURN?

I only wish I were kidding. 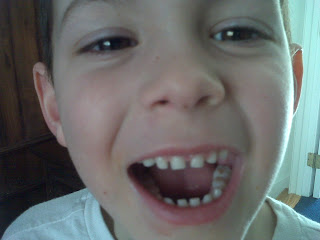 Those damn steadfast chicklets.  Not even a wiggler.﻿
Posted by Sarahviz at Monday, March 28, 2011

omg - I have three boys too and EVERYTHING is a competition as well. Infact, as soon as I hear the words, first is the worst, I groan b/c I know there is going to be an argument!!

I have a boy and a girl, and they turn everything into a competition, too! Or else they're fighting - usually my daughter starts it by punching or jumping on her brother. haha