He Said, She Said: On Sneaker Shopping

THEY SAID:  We have been shopping for months for new sneakers for Middle.  He is extremely fussy and picky about his footwear and everything he has tried on so far he has not liked.  Too small, too big, too ugly, too shiny, too hurt-y.  We swear we have been up and down the entire fricking state of Massachusetts looking for new sneakers for him.

SHE SAID:  But while we were in NY, Middle received another hand-me-down pair of Nikes from his cousin and started wearing those.  And Hubby and I both agreed that what the heck, those will do until summer when all he wears then is flip-flops and crocs.  Or is mostly barefoot.

HE SAID:  But when we were at the Mall (in NY) (waiting for my wife who was, shocker, shopping,) I randomly asked him, "Hey, wanna look in that store for new sneaks for you?" and he actually agreed.

SHE SAID:  For the record, please note this is after we pretty much agreed that he could wear those "new" hand-me-downs until summer.

HE SAID:  The first pair we found he wanted to try on.  The size 12s were too small.

SHE SAID:  This is when I entered the store and saw them.  Middle was complaining that they hurt his feet and I figured, "Oh no, here we go again."  But then Hubby had the size 13s all ready for him to try.

THEY SAID:  It was a Christmas miracle!  He actually liked the sneakers! 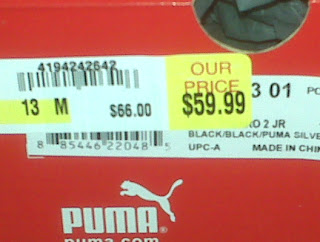 SHE SAID:  Yes, you are reading that right.  Sixty fricking dollars for little boys' size 13 sneakers.  I immediately glared at Hubby and said, "Oh hells no.  We are NOT paying that for sneakers!!!!"

HE SAID:  Ok, here's my rationale:  Middle NEVER gets new sneakers of his own.  He's constantly wearing hand-me-downs...

SHE SAID:  ...which he obviously seems to prefer.  Apparently he likes them already "broken in".

HE SAID:  So he has not had new sneakers in over a year.  The sneakers he has been wearing are hand-me-downs that are a size too small!  And the new hand-me-downs he had just gotten, I know he wasn't crazy about.  My wife MADE him wear them.

SHE SAID:  How do you NOT check the price?  If it had been me, he would never even have tried those on in the first place because the price was so ridiculous!

HE SAID:  Obviously, I was just looking at the sneakers, not the price.

SHE SAID:  As a mother and the primary shopper of this family, I have a set price point for everything.  For example, I don't pay over $20 for jeans for the boyz (I'm looking at you, Old Navy, with your jacked-up regular prices...) and I certainly wouldn't pay over $30 for regular everyday sneakers for the boyz!  In this instance, however, I probably would have sprung for $40 for Middle because it's been so difficult.  BUT NOT $60!!!

HE SAID:  Well, I wasn't about to search 47 more stores just to save $20.  And hello?  He liked them.  No wonder why we hadn't found anything before.  You've been offering him cheap ass sneakers to try on!  He had no idea about the price - he picked what was comfortable.

SHE SAID:  What if I had not come into the store at all?  Would you have hesitated when you discovered the price on your own?

HE SAID:  I still would have bought them.  Look, like I said, the kid hasn't had new sneakers in over a year. If you break it up, it's like 2-for-1.  Instead of spending $30 twice a year, I just paid $60 one time.  And you certainly can't argue with this, Miss Shopper.  Who's the one who says she won't pay full price at a regular Ann Taylor...but then you hit the outlets and spend twice as much!

SHE SAID:  Whatever.  I'm just pissed that someone is actually selling those things for that amount...and that you're a sucker for buying them for that amount!   Hello, Puma??? Weren't they popular in like 1987?  Who do they think they are??

HE SAID:  Well, I actually really like them. I kinda want to get myself a pair now too...

SHE SAID:  *shaking head and walking away* 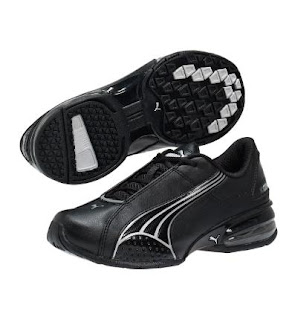 For the cost of them, they should be gold.  And self-propellent.
Posted by Sarahviz at Wednesday, March 02, 2011

Love it! Thanks for making me laugh! I could totally see my husband and I having the exact same conversation!

Say hello to your future. I experienced the same thing in which everyone in my family pays way more now for their shoes than I do.
If you have Kohls there they sell a gazillion sneakers and have killer sales.
If your kids start to like skate shoes for school I suggest OK Skate online in which you can get them for $25, but they start at size 1 or so.
Also, since they have such few shoes compared to girls I say we are better off, even though this transition into pricey sneakers is scary at first.
--Michele R (Must be a full moon)

So does middle still love them? What happens in our family is that same thing except when we get home my boys would decide that the don't quite like them as much as they thought.....LOL! I can always count on your posts to put me in a better mood!

It is highway robbery what they get for kids sneakers. My only justification is that you do get what you pay for. When it comes to your feet I believe you need good shoes! Thanks for the much needed giggles!

Seriously. The cost of kids clothes and shoes is crazy. For those prices they should be self-cleaning and glow or something. And kids grow so fast that it is really hard to spend that much on it since it won't last years (or many months either.) Dreading the day that I have to deal with this when L can actually talk and have a say. Crap.

So I totally enjoyed this for many reasons.
One being that I love knowing that there are other children out there who are so picky about everything that goes on their body. My Princess refuses to buy shoes at Target - she must go to a real Shoe Store. Hello I buy shoes at
Target.
My second reason and now I am totally going to dork myself out is because it so reminded me of the "Can This Marriage Be Saved" in Ladies Home Journal. Which I read EVERY time I went to my Grandmother's house. And now actually look forward to waiting in a Doctor's/dentist's office just so I can read the most current issue. I know very lame...

Sneaker shopping for my kids is the ABSOLUTE worse thing in the world. I break out in a cold sweat when I have to take them sneaker shopping. I find it very funny/odd that my middle child is the same as yours. So picky when it comes to footwear. I actually caved a couple of weeks ago and spent WAY too much on a pair of those Reebok Zigs for my middle guy. He's happy and hopefully I won't have to do this again until summer.

Oh dear God, that sounds exACTly like my husband and me in the store. EXACTLY.