So I was all set to tell you guys a story about Report Cards in the Trenches...two good reports and one notsomuch.

But the perpetrator of the notsogood report card is down and out--for the second day in a row now.  So I'd kinda feel bad telling you about his Kindergarten Mishaps while my heart is breaking for him.  There's nothing worse for a momma than having a poor pathetic sick child (especially while she has to go in to work).

The fever started Sunday night at 11pm.  Last night he hit a record high of 103.5.  Tylenol/Motrin brings it down to about 100.

I was home with him yesterday.  Hubby is home today. 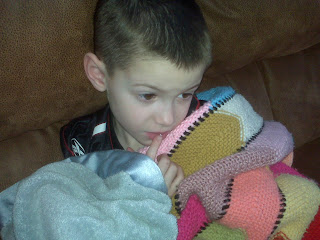 So moving on!  (As I choke down the Mommy Guilt which tastes REALLY REALLY nasty, by the way...I mean, just lookit dat wittle face...)

I've decided to add a new feature to this ole blog here.

You guys are really funny, you know that?!  Some of your comments literally make my day and make me LOL.  So now, after I put a post up, I will add the best comment to the bottom of that post.  So get your wit on, people!

Oh, and one more thing?

I have been nominated for Laugh-Out-Loud Parenting Blog by About.com.  I'm up against some pretty formidable competition.  Hello?  The Bloggess?  Hysterical!  And Scary Mommy Jill?  One of my friends who totally has the same sense of dry, sarcastic humor as me.

You can throw me a vote, if you want.  I'm totally honored just to have been nominated.

Here's hoping for healthier days ahead.

(...although, seriously?  Who am I fricking kidding?  What's the over-under on who/when someone in my Trenches catches this fever virus next?)
Posted by Sarahviz at Tuesday, February 15, 2011

Omigosh, CONGRATULATIONS!!!!! Good company, for a good woman and mama.

Wishing your wittle one well.