My first thought was a steely determination to get a workout in.  30 minutes on the stationary bike.  Situps.  Pushups.  First thing.  No. Matter. What.

30 minutes later...I find myself downstairs acting as a short-order cook.  This one wants a waffle. That one wants cereal.  That other one wants a bagel with cream cheese.  Still in pajamas.

1 hr 50 min later...I tear myself away from my preshus iPad and head back upstairs...to finally change into workout clothes.  Stop at top of stairs and see that washing machine is finished.  Switch laundry.  Gag at pee smell eminating from the boyz' bathroom...

2 hr 20 min later...Break up a fight over the Wii/iPad/basketball/football/TV (take your pick).  Instruct boyz to get dressed.  Decide to have a slice of toast.  Still in pajamas.

3 hrs later (by now almost 11 am)...Head to basement to work out.  Give strict threats instructions to boyz that Momma will be busy for next 40 minutes and to not bother her. 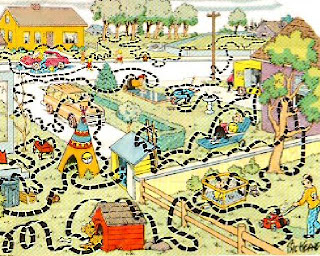 Picture this, but inside.  That'd be me.
Posted by Sarahviz at Wednesday, January 12, 2011

Oh my, and I think it is time to teach the boys to get their own cereal and how to clean the bathroom..

And where's dad on this "lazy" Saturday.

It's like reading about my life on someone else's blog.

Yep. That about sums up my "lazy" day, too. I'm considering teaching my 8 year old how to do the laundry. It's a valuable life skill for her to learn. Right?