So when we left off, the lovely heroine (that'd be me) was curled up in bed in the fetal position after a long night of vomiting and a morning of spewage from both ends.

With a 6 mile leg of a relay race to run the next morning.  I texted one of my fellow runners a warning message that I was sick, and wasn't too sure about the race, but that I would get back to her later.

I ended up falling into a deep, coma-like sleep.

And woke up a few hours later, at 2:15pm.  Eldest's final football game was at 2:30.  The Trenches were empty.  Everyone was already at the game.

I tentatively assumed an upright position.  And whaddya know?  The room wasn't spinning!  That was progress.

With each minute that passed, I started to feel better.

And I knew that I couldn't NOT run.  I had 4 other teammates to think about.

So I packed my bag for the Cape.  And trudged off to the football game.

(Where I had already missed a touchdown by Eldest, but totally lied and told him OF COURSE I saw it-great job buddy!)

After the game (where the smells wafting from the concession stand didn't even make me queasy!) I headed to the Cape to meet up with my teammates.

By this time, it was almost dinner.  And I hadn't eaten anything since that fateful baked stuffed haddock (*insert full body shiver here*) at lunch the day before.

Needless to say, I was STARRRRVING.  Yet wanted to take it easy.  So my dinner consisted of about 3 slices of bread, a half order of linguine with tomatoes, and a salad.  Oh, and about 47 glasses of water.

The Cape house where we spent the night? 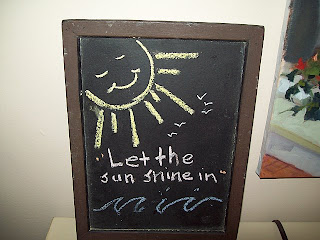 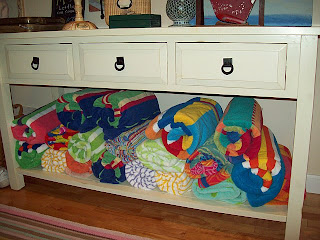 (I was totally obsessed with this eye-catching and whimsical beach towel set up. Think I could pull this off  even though I don't live anywhere near a beach?)
*****
The morning of the marathon dawned bright and chilly.  Start time was 8:30am. 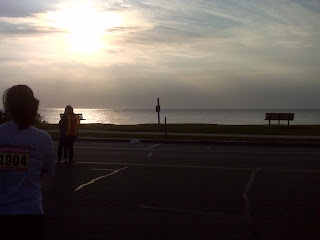 This was the view from the first baton exchange.  Gorgeous.

So, I had never run a relay before.  My honest opinion?

Trying to figure out the drop-offs and pick-ups.  The timing.  The navigating.  The closed roads.  The traffic.

I was the 4th out of 5 runners.  So I didn't even start running until about 11am.  My leg was Miles 15 through 21 of the marathon route.  I felt TOTALLY chintzy starting with and passing some of the marathoners who were obviously dead-legged.  And I felt even chintzier when people applauded and cheered as I ran by.  There I was, at Mile 17, but really only 2 miles in, and people were encouraging me to keep going!

Anyway, I had a good run.  I felt no lasting effects from the food poisoning, which was fortunate.

And my team finished with a respectable 10:33 average mile time. 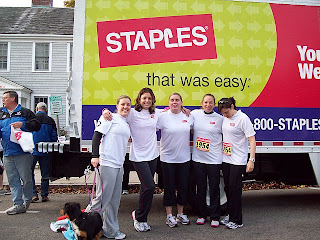 And I will NEVER eat baked stuffed haddock again.

Glad it all ended well.

I am so glad you got to finish the race!! Go you!!

You're a rock star! I don't think I could have recovered that quickly!

YAY! I'm so proud of you, Sara! You killed it, and did it while probably mildly dehydrated and still recovering from the haddock plague. That's dedication and love, my dear :) I'm so impressed with your athletic prowess, I can't even tell you! You're going to look like a supermodel by the time we get to Blissdom, and I'll be less than two months postpartum...

so I'll be looking like a deflated semi's tire....

Hey there! Dropping by from the Blissdom link on my site, http://livingthebalancedlife.com. Wanted to look around a bit and get to know you! 'Lovely" story about vomiting and running, lol! But congrats on doing it!
Bernice

This is my first time on your blog, hopped over from Boston Parent Bloggers so I just wanted to say hi! So sorry about the illness's! I can't even believe you finished a race! Congrats! I am looking forward to reading your beginners guide to running. I started out with the couch to 5k in Sept but haven't kept it up as much as I would have like to! Looking forward to getting to know you! :)