Running a Half Marathon

Shortly after I made the decision to run, I found out that my brother Dan had NO intention of running.  Hrmph.  So it wasn't going to be a sister-sister-brother running affair after all.  Just sisters.  One wayyyyyy faster than the other.  (Clue:  Not me.)

Happily, neither of those things happened on Sunday.  Go me!

The morning of the race dawned bright and chilly.  Temps were low 40's.

But wait.  This wasn't a morning race.  Nope.  The frigging race didn't start until 1pm!  Which totally threw me off.  I'd soooo much rather get up early and go run a race.  Just roll outta bed, get dressed, and RUN.  Now I had to think about what to eat, WHEN to eat and HOW MUCH to eat.  Grrrr.

So I settled on a whole wheat bagel with cream cheese.  And 64oz of water.  And a banana on the way to the race. 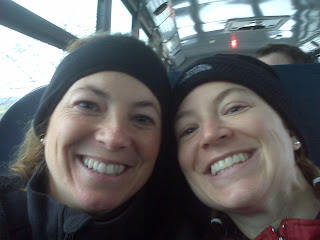 (all smiles on the shuttle to the starting line)
The start of the race was at the local community college.  High up on a hill.

My Sis and her friend Jill convinced me to start at the FRONT, since the race was a shotgun start without timing chips. 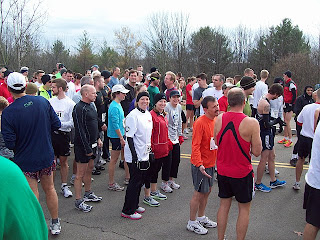 I, on the other hand, was convinced that I'd be trampled by skinny men in tank tops.

Thankfully I wasn't.  I just stayed to the side as everyone passed me right out of the gate (including Jill and my Sis).  Probably not a good move on my part, psychologically, to put myself in a position where I'd be passed right away constantly.  Oh well.

But it certainly made me run faster.

Now, I had been warned that the first part of the course was "hilly".  And it was.  But it was rolling hills, which I'm used to training on.  After 4 miles, I thought the hills were done. 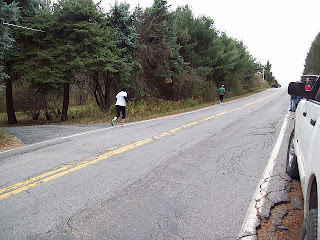 I think it was at Mile 5, there was the Mother of All Hills.  (And this pic is NOT it.  This was merely one of the "rolling hills".)

I may have sworn a few times as I approached this behemoth.

But then?  After that?  Miles 6 through 9 were gently sloping downhill.  I felt great. 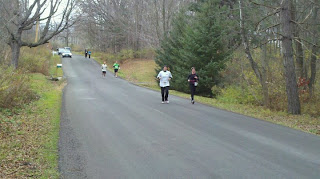 The last 3 miles of the course were completely FLAT.

It was as if I was trudging through a swamp.  I could not WILL my legs to move any faster.

My pace slowed wayyyyy down those last 3 miles.

I seriously thought the race would never end.

The last part of the race was over a bridge to the finish line.

My Sis (who had already finished with a time of 1 hr 55 min) ran back to find me: 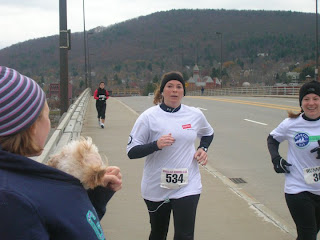 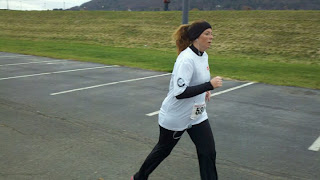 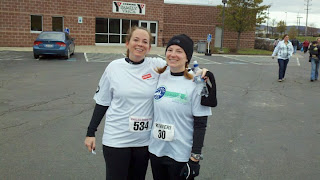 Go you!!!! So awesome you did it. And I love when I complain of a hill and someone says, "what hill?" I can feel ANY incline!

I completely spaced that you were running the Red Baron 1/2 marathon. Shoot! I could have come and cheered you on! Since I live only 20 minutes away! Bummer!

I hear you though on not having any legs for the "flat". I had that probably last night. I'm so used to running rolling hills/inclines that I struggled until about 2 miles in on a 4 mile run in town last night cause it was all flat.

I wouldn't want to do something ENJOYABLE for 2 hours and 9 minutes. Definitely would not run for that long.

You are awesome and an inspiration!

Congrats! What an accomplishment. I'm so impressed!

Yeah Sarah - You are a rock star. Can't wait to hear more details in person. Jodie

WOOOO HOOOOO!! I cannot tell you how proud I am of you. That's an incredible accomplishment! And you had a GREAT TIME! Mama, you are one hardcore runner :) And you looked fab doing it, too.

Yay you! I decided to try running again after a big, horrid post-partum fail last year.

I went one mile yesterday. One. My hips hurt. I am most impressed by your half-marathon.

Girl-I don't know if you remember me from The Tarnished Tiara, but I just ran my first half marathon, too! It was HARD. I'm running my second in February. I hope you are well.