The Work Halloween Party That Wasn't

So you pretty much can just hand over that Mother of the Year Award to me now, ok?

I totally lied and told my children that the Halloween party at my work was cancelled for today. 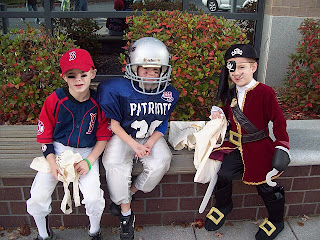 (Here they are at last year's party.  The one I didn't lie to them about.)
In my defense, here's what we have going on:

Hubby is out of town on business.
My work party starts at 3pm.
The boyz don't get off the bus until 3:15pm; otherwise, I'd have to do parent pick-up at 2 separate schools starting at 2:15.
It's a 30-minute drive each way.
The party ends at 4:30.
All 3 of them have their last football practice (a-freaking-men!) tonight from 6-8pm.

AND AND AND they are being kinda wishy-washy about their costumes.  Because they have TOO MANY choices!

At first, all 3 were going to be Transformers.  So I bought the costumes.  Which turned out to be cheap bodysuits and flimsy plastic accessories.  Thumbs down.

THEN a friend gave us 3 more costumes:  Darth Vader, a storm trooper, and an alien.

PLUS we have an entire bin of costumes!

The only one who is settled on his costume is Baby.  He's being a policeman.  And when we mentioned that we could perhaps draw a mustache on his face, he instantly declared, "Just like Paul Blart, Mall Cop!"  So yes, my 5-year old is being Paul Blart for Halloween.  Excellent. 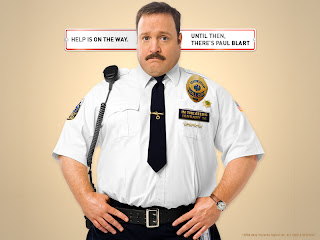 Anyway, when I tried to figure out the logistics of it all (including having to drive back and forth to work TWICE in one day), it just was too much.

Not do-able.  Not practical.  Not gon' happen.

So when I got home from work last night, with sorrow in my voice, I solemnly told the boyz that the Halloween party at my work had been cancelled, which news was met with one "Yay!" (Eldest) and two "Awwwwwww"s (Middle and Baby).

And so today, when I see pixie-sized princesses and pint-sized superheroes traipsing through my building, I will swallow my guilt and remind myself that I made the right choice...

I know this makes me a horrible mommy, but I'd be thinking about how laid back and free I'd be feeling sans kids. But then again, maybe your boys don't talk as much as my girls! :)

Sounds like you have a lot going on.. can't do it all.

Love the costumes from last year but then again I am a Pats fan.

You did what you had to do. No guilt. Until they make a Mom Cloning machine, sometimes we just have to say no.

You are a good mommy. There's only so much we can do in a day!

Hoping the huz will be home for The Big Night!