All 5 of us were in the car, driving home from Eldest's football game on Saturday.  From the 3rd row, Baby piped up excitedly.

(Only Baby didn't say Fudge.  He said THE word, the big one, the queen-mother of dirty words, the F-dash-dash-dash word.) 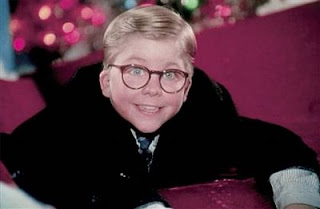 Hubby literally almost veered the car off the road at that moment.

Meanwhile, Eldest sat stonefaced and Middle (the perp) just looked at us blankly.

Hubby:  "Middle!  Did you say that?  WHERE did you hear that word?"

As soon as that second question fell out of Hubby's mouth, I involuntarily cringed.  Did we REALLY want to know where (or better yet, from whom) he heard it?

I kid you not.

Hubby turned to glare at me while I slowly slunk down in my seat a lil' bit.

In my defense, we only have one stinkin' iPod shuffle for our entire household.

(Because I accidentally put the other one in the wash.)

So, yes, the kids use it.  But I also use it for running.

So there may be a song or two on there that is fast, upbeat, and possibly inappropriate.

(I'm thinking it was that Violent Femmes song.  You know the one.)

(I erroneously figured they would just skip any songs they weren't familiar with.)

What's curious to me about this story is that Baby knew enough to tell on Middle, Eldest kept his mouth shut the entire time (so as to possibly not incriminate himself?) and Middle (who has perfected the art of the blank stare) seemingly didn't really know that it was a bad word.

Anyway, as I was retelling this story to a friend, she looked at me incredulously and responded, "C'mon!  Your boys are totally playing you.  OF COURSE they know the F word!"

Except, you see, I'm not really sure they do.  Honestly.

The "F word" really is fart in our house.  And the "S word" is stupid.

They think if someone sticks up their middle finger, that it means "jerk".

The words "shut up" and "Oh my God" are NOT allowed in our Trenches.

I'd like to keep them innocent for as long as possible.

But they do ride the school bus.

They do play sports.

They do hear adults talking.

But I think they really didn't know that f*ck was a swear word.

How do you handle swears in your Trenches?  Do your children know the F-dash-dash-dash word?
Posted by Sarahviz at Wednesday, October 20, 2010

The S word in our house is Stupid, too.
I really don't think my 3rd grader knows the F word, but, yes, he does ride the bus, so I guess you never know.

the S word in our house is School.. why is it youngsters pay attention only at the "bad" parts

Why do these conversations always take place in the car? How is it Middle didn't know it was a bad word yet Baby knew enough to tattle?

I like to keep them innocent too but as long as they know it's a bad word and NOT to use it (under penalty of death), I think that has to be enough.

The c word in our house is apparently crap - the kids pulled that on Husband one night who thought he was going to have a heart attack.

Last week at soccer, I was walking across the field with Moe. She turned to me and said "they mover the ficken port-a-potties" and kept walking. I had to stop and tell her that was not acceptable.

We've also had the talk about that word because they LOVE Kei$ha and "Billionaire (did I get the right artist because I am so out of touch with reality)" and not everywhere plays the kid friendly lyrics. Moe (again - darn 6 year old) asked us once "can I say the bad words in my head?". Her sisters said "well yeah because mom can't hear you".

I have a friend who overheard her 4 year old saying it to his baby sister. Flabbergasted, she sent him to his room, and then went to talk to him about it and find out if he even knew what he was saying. Sitting on the edge of the bed, she asked, "What was that word I heard you say Sam?" And he replied calmly, "F**k F**ker F**ked," as if conjugating a verb.

She ran from him room and collapsed in the hall laughing.

I can't remember what she found out about where he heard that, I just know it took her 10 minutes to be able to go in his room again with a straight face!

My daughter's first sentence was "Ernie goes down on Bert." That didn't make the baby book. And it wasn't my fault.

I am really bad about the OMG phrase. We correct, and say, Oh My Goodness. Sometimes my four year old corrects me.

We were recently around clergy, when someone spilled something. My daughter very loudly says, "Oh...MY......

Thank God for that.

My husband and I realised that we probably used some inappropriate words more than we thought, and had to quickly readjust our vocabulary. One that isn't really a swear word to me, but can be quite offensive here, is 'bugger'. I used to use it all the time, but when I heard my 2-year old say it, realised that I had to rethink that. Now we just say 'oh, poo'. We've had to come up with a lot of substitutions, and it seems to work.

I remember when my sister was younger she said 'crap' and I couldnt wait to tell on her for swearing...only to have mum tell me that 'crap' isnt really a swear word and its ok that she said it :-( I was a bit dissapointed to be honest lol
I'm 22 now and still wont swear infront of my parents, i think its disrespectful xx

It has become apparent that my son (9) has taken up swearing amongst his friends. Not long ago he was furious I wouldn't let him have/do something and he slipped and called me the "b" word.

And immediately he ran to his room because he knew he was in trouble.

I'm certain he's heard me swear, though the "b" word isn't really one I use. (I'm notorious for saying $hit. As in, I'm a klutz and my immediate reaction to something falling on my foot is that word.)