When I got an e-mail from my Hubby that read, "How come you haven’t blogged about any of your sons' football games with photos of them!? Jewelry? Seriously?" I realized, whoops, I have been kinda tardy with the obligatory "Proud Football Mom" posts.  So yes, it's time.  Lucky you!  Heh.

This is Eldest's fourth year playing Pop Warner football.  (Which?  Holy crap - he's only in third grade.) But oh, how far he's come!  His games are actually, dare I say, exciting to watch this year.  Weighing in at a whopping 58 pounds (the second lightest on his team) and being matched up against hulking 90-pounders, Eldest definitely can hold his own.  His motto?  HIT OR BE HIT.

He's been doing some quarterbacking... 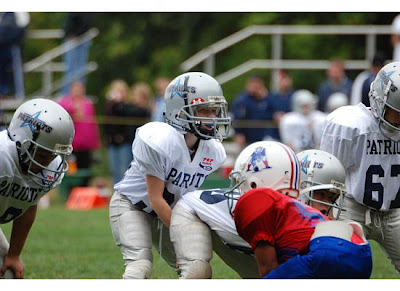 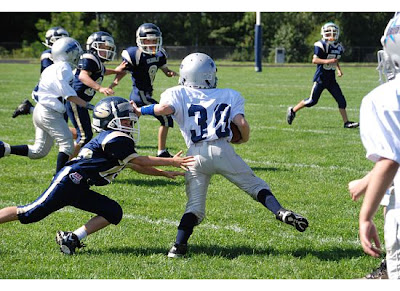 Hubby is coaching Eldest's team again for the 3rd year in a row.  He looooves being a coach.  For real.  His nickname?  The Child Whisperer. 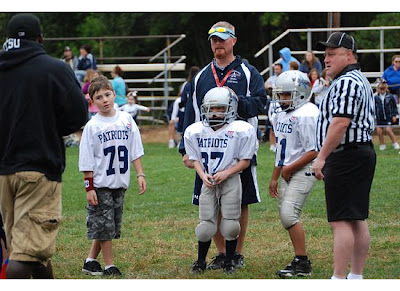 And this year is Middle and Baby's first year.  They are on the "Tiny Mites".  How appropriate. 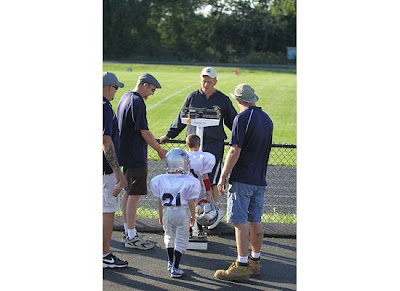 (That's the two of them being weighed-in.  Yes, every team gets weighed before every game.  Baby is an intimidating 39 pounds.  Middle is a whopping 43 pounds.  Hefty, huh?) 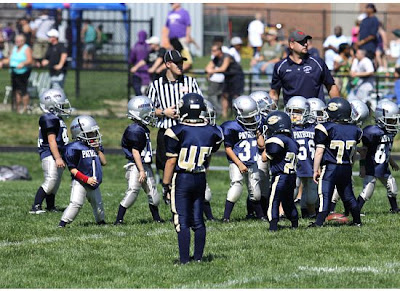 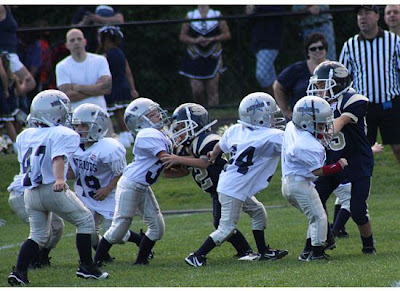 And Middle.  They have him on defense.  And he's actually getting it.  He zeroes in on the guy with the ball and just goes for it!  It's fun to watch. 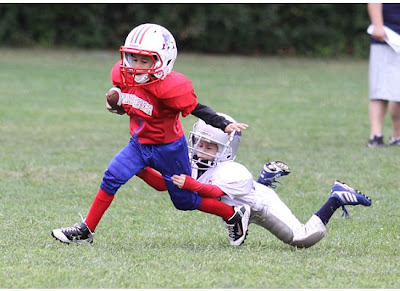 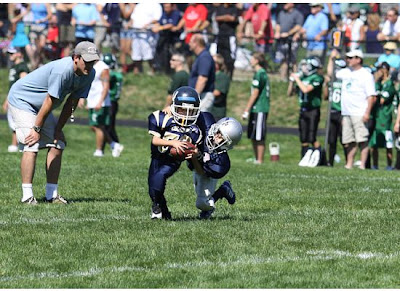 We are basically living at the football field these days.  Practices are Tuesday (little boys), Wednesday (both teams), Friday (Eldest) and Saturday morning (Eldest).  Games are on Sunday mornings.
Honestly, though?  I don't mind it so much this year.  It's my Social Hour(s).  I sit and chat with the other moms.  We have a pretty tight-knit group of "football family" and dammit, we make it FUN.  Bleacher butt and all.
But still.
Let's put it this way.  I won't be sad to see November come.
This Football Mama is tired!
Posted by Sarahviz at Tuesday, September 14, 2010

Funny how their schedules dominate your life, isn't it?

And it seems to start SO much younger these days.

Good grief! I only have two kids and I'm stressing over the time their activities are going to consume our lives and they aren't even in any yet!

Sunday mornings!!!??! That would be sacreligious in the South.
Glad you are enjoying it!
(I had to fly out of state and back today and then watch baseball from 7:30 to 9:00. It was the best part of the day!!

Hats off to you - not sure I could do it.

They look SUPER cute, I would go crazy with all that football. But let's face it, I'd go crazy with all that BOYness. I went to a concussion clinic, and tons of boys have serious issues from the "suck it up" mentality. Playing on can be super dangerous, especially the more they get it, especially the younger they start hitting things with their heads. Just one more thing to worry about.

Ha ha I have football every day of the week 2.5hr weekday Saturday 10am-2pm Sunday game