Chaperoning the Kindergarten Field Trip to the Zoo

So last week I was one of the chaperones for Middle's kindergarten field trip.  To the zoo.

With hundreds of kindergarteners.

When's the last time you rode on a school bus?  With hundreds of 5 and 6-year olds lacking volume control?

[As an aside:  Holy crap, I can't believe I (we) put my (our) preshus children on a bus everyday.  Those things are like TIN CANS.  Echo-y and bouncy.  And NO SEATBELTS.  Because why would we want to contain the overeager and screechy young things?  Instead let's let give them free reign to turn around, hang over the seats, and SCREAM LIKE HELL no matter how many times you yell at gently remind them to turn around, sit down, and be quiet RIGHT NOW.]

(I could never EVER be a bus driver.  Bus drivers?  I salute you.)

Regardless, we made it there alive.  I only felt mildly queasy.  And definitely headachy.

But, I must say, it was very well organized.  Each chaperone was assigned 4 or 5 students.  We were given a first aid kit and each of our assigned students' packed lunches.

Except I felt like a pack mule. My tote bag felt like I was carrying a bowling ball, but lo, it merely contained a plethora of juice bottles, fruit and sandwiches.

So my little group?  Ate lunch at 10:30.  This chaperone was ALL SET carrying that weight on my shoulder, thankyouverymuch.  And the children?  Totally didn't know the difference until they started complaining that they were hungry again before we even had to go back to the bus but luckily I had packed emergency pretzels and goldfish to shut them up...err, I mean, satiate their hunger. 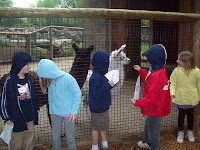 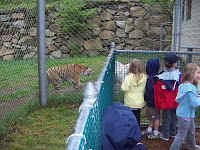 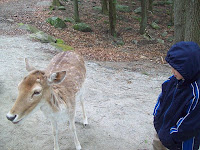 
I was freaked out by the deer because there was NO BARRIER.  You could go right up to them and feed them and they were ALL ABOUT the popcorn kernels we had been provided.  Sniffing and huffing and licking and ewwww...So is it bad that I sent all 5 of my charges into the pen while I stayed outside and took pictures?  No?  Good.

But, by far, the best part, both for me and for the children, were the monkeys.  Hilarious!  And the giggles of the children were infectious.  See for yourself:

Cheeky Monkey! from Sarah Viz on Vimeo.
All in all, I must say, it was a good day.  Aside from having to utter, "Walk!" and "Slow down!" about 50 zillion times (and having my hair look just like Roseanne Roseannadanna's because it was misty and humid out and I forgot both a ponytail holder and hat - way to impress the other parents, Sarah, with your slightly deranged appearance...), I was happy to be able to spend time with Middle and his classmates, and he was thrilled that Mommy got to go.

And when I got home that day, I immediately took two Excedrin.  With wine.

Can't wait to do it alllllll over again next year, when Baby is in kindergarten.

I'm sending Husband with Moe to the zoo on Monday (and judging from the pictures, I'm pretty sure the same zoo). No way am I talking a bus with them (and there are only 25 kindergarteners).

I totally want that monkey. Hilarious!

I feel the same way about school buses! I always wonder if they will be any different when Monkey and Mouse go to school. My magic 8-ball says "doubtful"

Fun, fun fun...as a teacher, I dread field trips b/c of the bus issue. Field trips are fun though...we need a little more fun in education! That video made me a little happier today!

I can't wait till I get the chance to experience that hell, ummm I mean fun time with my children. Yeah. That is totally what I meant.

Good for you!
I haven't chaperoned any, but will when they are both in school every day next year.

Is this Southwick Zoo? I do love the freedom of the deer forest, but totally understand the freakiness of it. A kid got kicked by a deer last year when it startled if I remember correctly. You have grounds to be nervous!

I'm taking my 2 to the zoo when schools out - and all I want to do is camp at the otters and the Polar Bears - forget everything else!

You deserve a merit badge! I always felt like I had achieved something humongous after volunteering for school events! I think you need to add a star to your crown!

Cute! It was very nice of you to volunteer. :-)

I used to go on field trips when I was in school with my mom's four year old class. Good times. :-)

Funny about the snacks! That age is ALWAYS hungry!

I was SO happy when, due to budget cuts, chaperones were asked to NOT ride the buses with the kids but carpool and meet up with the group wherever we were going. I gladly volunteered to drive four other parents into Boston's Museum of Science. The only thing that would have made it better would have been if we had coordinated where to have lunch on the way out...

Thumbs up for surviving the experience!