Why I Don't Donate Blood

After graduating from college in 1995, I had moved to Charlotte, NC (with a boyfriend who became a fiance who became an ex-fiance who became an ex-boyfriend.  Bygones.) and landed myself a "big girl" job through a temp agency as a Buyer's Assistant.  Which was a fancy way of saying I did data entry for 8 hours a day, 5 days a week.  CLEARLY my Bachelor's degree in Psychology was paying off in spades.  It was mind-numbing, but I met some great people at that job who are now lifelong friends. (Hi Michelle!  Hi Bo!)

Anyway, I had donated blood in the past a few times and my work happened to be holding a blood drive in a conference room on our floor one morning.

And since I was hungry and wanted some free juice and cookies I decided to donate.

I felt FINE throughout the entire process. 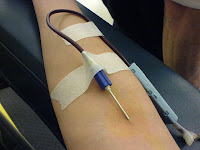 However, when it was time for me to sit upright, I felt the room spinning and my vision narrowing.

When I came to, there were many faces hovering above me.  I felt like I was drenched in sweat.

I was mortified and wanted to get out of there as quickly as possible.

So once I was cleared, I high-tailed it back to my little cubicle.

"Boy, I'm reaaaalllly sweaty," I thought.  And I truly was.  My armpits.  The back of my neck.  My hairline.

Thankfully I was wearing black pants.

I scurried to the bathroom to investigate.

Where I realized that I had, indeed, PEED MY PANTS WHILE I WAS PASSED OUT.

So I had to lie to my boss (I used the sweaty and clammy excuse and obviously she couldn't say no because hello? I had just PASSED OUT) in order to leave to drive home to SHOWER and change my clothes and then drive back to work.  (Why did I even go back to work that day?  I have NO IDEA.)

(And now, all these years later, I wonder if I SMELLED LIKE PEE?)

So there you have it.  Needless to say, I have never felt compelled to donate blood again.

I think I have a pretty good excuse.

Holy crap this whole post makes me sweat - I hate needles and blood and the whole thing. Ugh.


But it doesn't make me sweat in my pants. Thankfully.

but seriously just the picture made me sweat. no pee. but sweat yes.

oh, yes. I know just what you mean.

and a good excuse if i ever heard one.

Oh, my. Never peed at work, although I did come close a few times while pregnant and stuck on conference calls in my office. But, there was the time when I walked around with my skirt tucked into my stockings. That was a fun day.

Oh my word! The funny and the mortification and yowza.

I completely empathize - yesterday I blogged about the time I realized my entire office could see me exercising my butt.

Now that is a new side effect. I think you totally have a legitimate out.

Sweetie, its only natural. ;)

Yikes, I can't say as I blame you, but as a blood bank medical technologist I would love for you to try again. Blood is such a valuable resource. xx

Totally understandable. You are excused!

I passed out the one and only time I ever donated blood too. I had the whole body-sweat issue as well...but I did NOT pee my pants. What I did was pass out in an elevator in my building. Poor man who was with me didn't know what to do when it got to my floor!

Found your blog on SITS. You are ONE FUNNY MAMA! Love it!

Ha ha, I can't believe you went back. I was so afraid of people THINKING I peed my pants if/when my water broke that I toted around a spare pair of pants and a TOWEL (??) for the entire last trimester.

Hi! Please stop over when you have a chance, I have something for you..

Same exact thing happened to me at work but all my coworkers were present as I peed myself -___- so embarrassing :( went to the hospital since my blood pressure was so low