A Night of Unicorns Farting Rainbows in the Trenches

I was planning on writing about being annoyed over a plethora of things lately.

But then I had a night like last night.  Where all the stars aligned and lo and behold...

IT WAS A GOOD, GOOD NIGHT.

I arrived home from work.  All three boyz were at the table in the sunroom, COLORING.  The TV wasn't even on!

Hubby went down in the basement to work out.  I was able to empty backpacks and go through schoolwork.  Eldest had gotten his 3rd quarter report card which was excellent (all O's and 4's - for whatever that's worth).  I was able to pull him aside and look into his eyes and tell him how proud I was.

Harmony continued.  We decorated folders for Middle and Baby to put their artwork in.

The TV went on.  There was no arguing over what to watch.  iCarly suited all 3 of them while I prepared dinner.  (I'd love to tell you it was a homemade nutritious dinner filled with nutrients, but I'd be lying.  It was frozen chicken tenders, french fries and raw (organic!) green beans.  Hey, 1 out of 3 ain't bad.)

I let the boyz eat in the sunroom at their little table.

No mess was made (much) and nobody spilled (much).

They all ate their dinner, drank their milk and cleared their plates.

Pajamas were donned without any fuss.

I was able to clean up the kitchen without interruption.  My domestic duties were done.

I snuggled with Baby and read Hop on Pop.  I've been meaning to do that for AGES.  Both Eldest and Middle were early readers.  Baby?  Notsomuch.  And for that, I feel guilty.  I just haven't been able to spend the time with him.

Hubby and Eldest were settling in for the first Bruins hockey playoff game.

There was no fighting.  No whining.  No complaining.  No backtalk.

It was, dare I say, MIRACULOUS.

For even this morning, the spell had already been broken.  Baby didn't want breakfast.  Eldest insisted on wearing shorts even though it's only supposed to be in the 40's.  There was fighting over the TV. 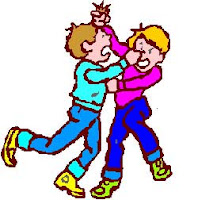 So when a magical night such as last night occurs?

Please forgive me.  I feel compelled to document it.
Posted by Sarahviz at Friday, April 16, 2010

If you figure out what caused it send some of it my way - we're due for a night like that!

Ah, yes. Sometimes the stars align and we get one of those rare, but beautiful, cooperative stretches!

I can TOTALLY identify with this line: "I guess I never realized how much that crap wears me down. Having to reprimand. Having to scold. Having to referee. CONSTANTLY."

Yes, yes, and yes! Thank goodness for reprieves, no matter how small!

Always document these (one a year) events!

Can you send some of that unicorn farting magic my way?

You're so right. That constant bickering, it's like living a life in pain.

Tylenol and chocolate: that's how I survive.

They don't happen often. But when they do? They make it all worth it!!

I had the opposite - 2 year old slammed a door on the thumb of my 1 year old so violently that the thumb looked broken. I had to take a feverish toddler and an hysterical baby to the ER by myself since my husband was out after work and couldn't make it home in time (yes, wanted to kill him). If tonight is similar, I'm sending myself to the asylum.

Yes, you totally must document it. That was magical.

congrats on having one momentary evening of family bliss.

Ahhhhh, I am feeling more relaxed just reading this. It feels (dare I say) attainable in our house too! Thanks!

LOL! Your title cracked me up. Yes, that IS worth documenting. I feel bad I don't read to my baby much, either. And we stopped buying organic as much since he was born. He sure got the short end of the parenting stick, poor kid!

A miracle to be sure.

Why is it that young boys love iCarly so much? My second grader can't get enough.

This has to be the greatest post title I have ever read.

I will faint of a heart attack the day I feel that has happened!

Sorry it was semi-short lived...maybe by the evening the stars will align once more!

Guess the kids know when we need a break sometimes. Oh, and OF COURSE you'd document it...it's momentous!

Only a mother would understand the bliss of an uneventful night. Hope you get another soon.

(And if you still want a good book recommendation, try "The Help." I haven't gotten enough sleep in three days for not being able to put it down. Wish I could also give you a few uninterrupted hours with which to enjoy it.)

"I have been reading "Are You There Vodka, It's Me Chelsea?" by the comedic God-DESS Chelsea Handler." - from masala chica - sounds like a good bet.

Wow! Aren't you worried that the earth spun of its axis? (I'm just jealous!)

You are so right - all that crap does wear us down. For me there was always the feeling that "if I were a better mom" this sh*t wouldn't be happening.
You are right to document it!!