My, Prom Dresses Have Changed Since the 90's!

So yes, at the ripe old age of 37, I have officially become one of those people who sigh heavily whilst peering over their glasses and say, "Well, back in MY day..." 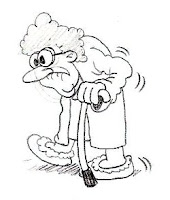 Because seriously people - have you SEEN some of the prom dresses these days?!

(Prom dress or bullfighter's red cape? Or cocktail napkin?)
So Prom was held last Thursday night in our town.  As I was driving home, many of the streets were riddled with limos and eager camera-toting parents.  A majority of the dresses I saw (because yes, I totally slowed down to rubberneck) were uh, quite revealing, to put it nicely.

With thigh-high slits and cut-out bodices.  Seriously.
So THIS is what I wore to my 1990 junior prom: 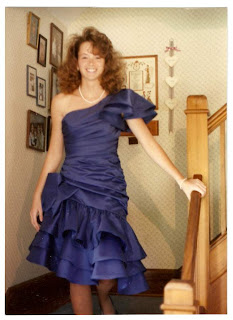 With yes, black pantyhose and purple shoes dyed to match (Payless shoe-dying services FTW!).  All to compliment the pearls, of course.  It's a close race between my hair and the dress for Most Puffiest.
Of course, the updated version of my dress 20 years later would probably be this:

Which is not that bad, but riddle me this - how does one sit without letting one's hooch hang out?
So then, for Senior Prom, in 1991, I wore this lovely bedazzled thing: 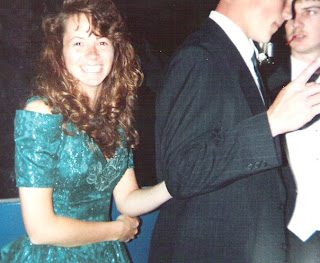 I think there was perhaps a butterfly on the bodice.  And just so you know, one has to spray obscene amounts of Aqua Net to get one's hair that high.  See? 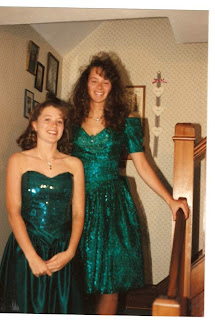 Rawr, it's the Jolly Green Giant!  (Hmmm...my sister's dress was actually quite cute.)
I'm thinking today's equivalent would be this: 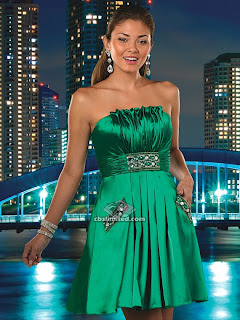 So I can't quite figure out if back then, when I was in high school, did we have bodies that looked like THAT? And we just never flaunted them? Or are today's girls just developing more rapidly?

And just WHO is buying this shit for their daughter for hundreds and hundreds of dollars?

I just don't get it.

Lynn from For Love or Funny said...

You're so pretty! I love your big hair! (I'm originally from New Jersey).

I totally agree and this kind of thing makes me so glad I don't have girls. Of course someday my boys will be bringing home brazen hussies wearing this sort of thing (or even WORSE by then) and I will have to start drinking HEAVILY!

Ooh! You are the prettiest thing. You belong on top of a cake.

And, I agree: where is the modesty??

Have you seen the ones where the top is just a sequined strapless bra sort of thing? The whol belly sticks out and then a short little hoochy skirt. Who buys that for their daughters?

I agree that prom dresses are complete hoochy wear these days.

I'm the same age as you, and my prom dresses were similar. Yay for big 80s/90s hair!

last year, we were doing family pictures in the park and there was a couple there getting their pictures taken for what I thought was wedding photos. But no, it was for prom. I kid you know.

And since the dresses have been getting shorter and shorter since the 90's, I wonder what they are going to look like when my daughter goes to her prom is like 13 years.

What is she going to wear a handkerchief? Or maybe just some pasties?

My senior prom was in 03 and I even think this way. Its bad enough parents let there daughters run around like this but dont schools have a dress code!

the styles these days are scarier than you big hair thats for sure.

YES!! This is so timely because I was just on Facebook looking at my 17-year-old niece's senior prom pictures and oh. My. GAWD!!! She is pretty, erm, "top heavy" to begin with ... so the dress she wore made her look positively Pamela Anderson-esque! I hate feeling so old and stodgy but damn, for my prom (in 1997) I wore a halter-style dress that only bared my arms, with a slit that came MAYBE to mid-calf.

OK so my senior dress in 1991 was almost identical to yours in 1990 but it was RED! With RED shoes to match. Who wears that? And the HIGH hair.. yup, I had it too!Cant wait to see what Kylie picks... I might have to veto several options before we agree on one.

I wore almost the same thing as your navy dress, but my sleeves (big ruffly things) were sequined...jealous?

Also, I kinda like your dress. I could totally see someone taking a scissors and some thread to it and making it totally 2010.

Aren't you cute, passing off '91 as "the 90's" when really it was just delayed 80's. The proof is in the puffiness. I don't think their bodies are any more developed than ours (and by ours I mean everyone who has boobs) they just show it more. It's the way fashion goes...Thank god showing your stomach isn't cool anymore, I about died seeing pre-teens in those skanky outfits.

OMG, I was just writing something like this----I'm not saying let's go back to the days of Gunne Sax head-to-toe coverage (see me in Promtacular this week for what I mean), but what they wear now, oy!

I get some grief along the lines of "But what about prom!?!?!" when people find out I homeschool the kids. Um, yeah, what about it? If my kids want to go, I'm sure we can figure out a way for them to go, but I will definitely not be a parent who lets them look like rent-a-hookers for the night. Some parents have lost their minds.

Oh, and btw, you ARE adorable in these photos! I LOVE seeing the poofy hair.

I love your junior prom dress - it's gorgeous!

Things like this are we I am forever grateful we have boys!

Be glad you have boys and will be able to tell them their prom dates look like hos instead of having too fight tooth and nail over buying one of those dresses for a daughter! My prom dress looked like a black Hefty bag compared to what the girls wear now. It's too much...

Yeah, I had a bluish green sequinned scoop neck strappy bubble skirt dress for my senior prom in 1992 with the dyed shoes to match. (Not Payless but a shoe store in the mall, I now can't remember the name.)

I know of one girl this year who goes to a Christian high school who had to have her prom dress approved by the school before given the okay to wear it. In general I think that's a bit over the top, but with some of the dresses out there, you have to wonder.

Is that a Snow in the background?!

So glad we have boys!!

And yes, I think we did have the bods back then. (you definitely did!). We were just too stupid to appreciate them.

I just sighed out loud. What can we expect from kids who grew up with Bratz and shop for thong underwear? It's not everyone, tho. My kids will have to be the exception.

I can totally relate...I saw some of the skimpy prom dresses last weekend...I guess their parents don't seem to care...some of the outfits look quite trashy...I guess I sound 80 years old as well!! BTW, I LOVE your prom dresses..I still have mine...classic!!

Love your prom pics! haha :) I had dyed purple shoes to match my dress too my senior year (1995) - and black panty hose, of course.

No way would I let my daughter wear one of those dresses. Insane.

My mom made me buy my own prom dresses and stuff so I had ordinary black shoes, but I didn't skimp on the Aquanet, that's for sure.

My six year old (SIX) went to a "glamour" birthday party and she walked out looking like a teenager. She's exceptionally tall for her age and has a little curve to her hips, and I couldn't wait for that party to be over. My husband about had a cow and put the kabosh to her attending anymore of these parties - we'll see how long that lasts. She has him wrapped around her little finger.

hoo boy. My hair wanted to grow up to be your hair, back in '90. I could only get the bangs to stand up,but damn if I didn't buy my fair share of Paul Mitchell Awapuhi hair spray to make it stay that way.

My grandfather always used to call my strapless prom dresses 'magic' because it didn't seem like I had anything to keep them up with. Ha. Wonder what he'd say about the girls dresses these days!

I've got.... maybe 10 yrs before I have to start buying this kind of gear, & I'm already dreading it.

I went to my prom in 2005, and everyone was in huge, fluffy, floor-length dresses. Just 5 years later the dresses barely make it past the mark where the behind meets the leg. It's crazy how fast things change.