Morning of Day 2.  I have a slight headache that Advil probably won't be able to touch.  When I woke up, my first thought was to take an Excedrin.  And then I realized, "Oh yeah.  Excedrin = Caffeine.  @#$#*!"
That would kinda defeat the whole purpose, huh?  Growl.

So for some reason, I still receive the One Step Ahead catalog in the mail.

Some (actually most) of the products in it cause me to roll my eyes and sigh heavily, because really people? 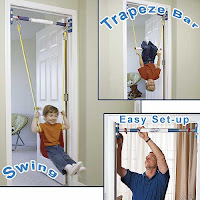 Ummm...if this isn't a head injury waiting to happen, I don't know what is.  Here junior, hang upside down on this bar with the tile floor beneath you.  NOW DON'T LET GO. 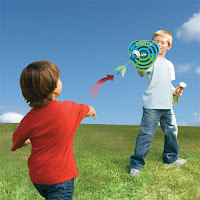 And hey!  Why don't you throw a foam dart suction cup thingy RIGHT AT your brother's face!
So you have those 2 products right there that sort of ignore COMMON SENSE and SAFETY.
BUT THEN you have some of these products which juuuuuust fall short of wrapping your preshus child in bubble tape: 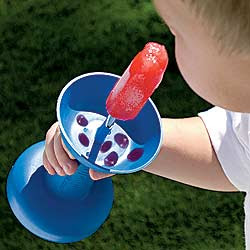 Because, damn, Momma just doesn't feel like taking a wet paper towel to wipe you off after you're done.  She'd rather pay $8 for a plastic contraption that she then has to wash. 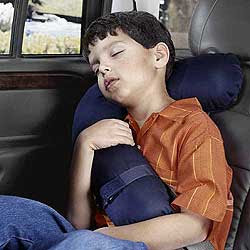 God forbid your child slump over in his sleep.  The travesty!
I still have two pretty avid thumb-suckers.  (Although Middle, reminiscent of a struggling alcoholic, says every year he's going to quit on his birthday.  Him turning age 6 in June will be his third year of attempting to lay off the sauce thumb.  Baby, on the other hand, makes no promises whatsoever. He may just walk down the aisle at his wedding having a suck-suck.) 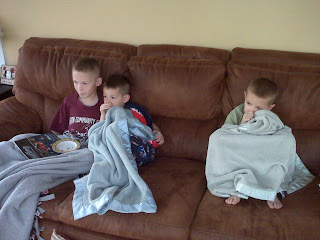 So how can this *concerned* mother (Heh. Couldn't type THAT with a straight face.) help them to quit?  One Step Ahead to the rescue! 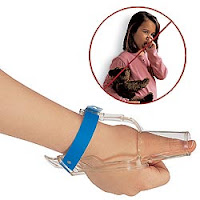 For a mere $75 I could sink my hard-earned dough into one of these medieval torture devices contraptions!  It promises to help my child "break the habit" in a mere 3 WEEKS!!!

C'mere little buddy.  Momma's gonna strap this thing on your hand.  So now you can look at your tasty thumb but you absolutely can't suck it.  Or even BEND IT.  That okay with you, kiddo?

Krista @ Not Mommy of the Year said...

You know what I don't get about those popcicle things? If the kid tips them over you'll have sticky popcicle juice all over clothes, hands, arms, etc. How is that better?

And the thumb thing? Weird.

I've never heard of that catalogue, but it's hilarious! Now I need to find out where to go to sign up for one of my own.

1. I get cutting out soda and stuff but not caffeine at all? Wow - good luck.

2. While I think that thumb sucking thing looks ridiculous, I will tell you that I sucked my thumb until I was 11 and only stopped then b/c the orthodontist put basically an upsidedown retainer in my mouth so I'd stop. I'm sure my mom can attest that that cost way more than $75.

I am so not getting the most out of that catalog.

I am right here, suffering with you. Misery loves company. This is the first day I have no withdrawal headache, and I quit about 2 wks ago.

It's awful. But I have to...my stomack was a wreck.

What's really hard is the mornings. And the brain fog. And the lack of energy. And, oh, yeah, creativity, too. And not wanting to exercise....

Damn. I was so hoping you were announcing a giveaway or something ... I mean, who wouldn't want one of those fine products? Especially the thumb-restraint thingy. Oh! Oh! I know! You could use it to string your child up by the thumbs when he misbehaves, with the help of that door-bar. YES.

Those things are seriously disturbing. Though I have to say, I was so sad when my parents got rid of my swing/jumpy thing, which they did so I wouldn't break the doorway with my much too big body. I was like 7 and still wanted to use it.

LOL!!! You continue to crack me up!! I love your commentary!! The thumb one kills me!!

What is that Hannibal Lector contraption over the thumb? I'd rather people stare my thumb sucker than the kid who looks like he should be in shackles and a straight jacket!

That photo of your boys slays me - look at the arm around. So cute.

I was a thumb sucker until I was 12. That contraption would have been off my hand in ten seconds flat.

These are GREAT! Kids can go from sucking their thumb to sucking plastic?! Indoor swings? What's next... indoor slides? Funny stuff.

That thumb thing definitely looks like some kind of torture device. I think you could find a cheaper, less creepy way to get them off the sauce-I mean thumb.

Man, you nailed it. One Step Ahead has always seemed to me to be the child-equivalent of those SkyMall magazines you find on airplanes. Perhaps your child could swing upside down on his door-bungee while you drink anisette from your Italian Replica Globe Bar, $149.99.

we got this catalog today and I get a big laugh from some of the things in there too. The thumb device always freaks me out b/c I too am a former suck-aholic. Eventually I quit on my own, didn't need braces, and turned out (relatively) fine. So i say let them suck in peace. :)

HAH! I get that catalog too...and have had similar thoughts. (Although, I do really like SOME of their stuff ;) )

And that thumb sucking contraption? I think my kids would just switch thumbs, so I'd have to buy TWO...and then...they'd not be able to do anything at all!! heheh no picking anything up. It's almost worth the $$ to watch that, but not quite ;)

SO glad I don't have thumb suckers. I mean, they have their own issues - like touching everything in site when we go anywhere and then sticking their ENTIRE HAND in their mouth.

I do get the popsicle thing. But we just used to cut a small dixie cup in half and put it on the stick. It cost maybe 2 cents. Because I'm thrifty like that.

Stopping by from SITS, and I am right there with you. I get this catalog to, and I often wonder to myself, where the hell to people come up with this stuff, who actually buys it and what in the hell made these people even THINK of it?!?!?

Well maybe they got inspired with the "Crazy Japanese Inventions" haha..... Wth?! And these are serious products?? No, really? hahaha..... Dropping by from SITS!

Hee, hee! Love this. That mag is insane, but admit it, for a split second, you think you actually need something because why would you be looking at it in the first place? Ha! And what's up with them sending one every other week?