Exactly the Reason Why We Should Never Leave Our Trenches

Alternately titled:  "I Couldn't Make this Sh*t Up If I Tried"

So yes, we headed to upstate NY this past Friday evening for a visit with Grandma and Poppa (my parents).  As soon as we got on the road though, Baby started complaining of a headache.  I'm enough of a seasoned veteran to know that with my boyz, complaints of a headache = VOMITING WILL SOON OCCUR.  We figured that he had probably eaten too much Valentine's Day candy in preschool that day.  Sure enough, as soon as we stopped for dinner, he puked.  So thankfully, it was in the restaurant and NOT in the car.  And then interestingly enough, I noticed on Facebook that the little boy with whom Baby had had a playdate earlier that day had also puked.  Except his parents weren't so lucky - his mom's Facebook status announced that Baby's friend threw up (1) in their car, (2) at a hockey game, and then (3) once more for good measure.  So relatively speaking, we were lucky.  And then before we even got back onto the highway from the exit, Baby was fast asleep (on me) for the remainder of the ride: 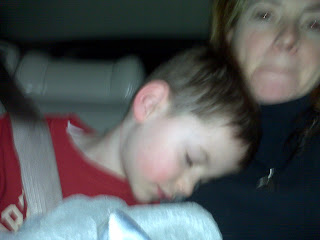 (Not quite sure why I'm giving the "no-lip" look...)
Anyway, we arrived safe and sound in NY and proceeded to have a great time ice skating... 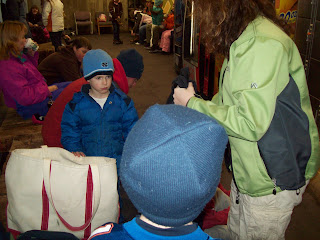 Middle wasn't so sure he even wanted to try ice skating... 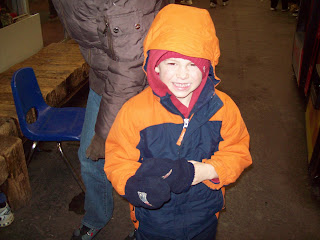 ..while Baby was VERY excited. 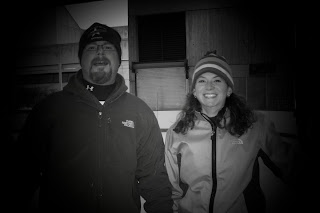 And even Hubby and I perfected our triple lutzes. (And just for the record?  Hubby fell on his arse TWICE.  I didn't fall at all.)  (And furthermore, am I the only one who totally thinks of Blades of Glory everytime the pairs figure skaters are shown during the Olympics?)
...and then swimming.  Where Middle learned to swim on his own! (And no, I didn't go in.  I watched from the sidelines because oh darn, I "forgot" to bring my bathing suit.  Heh.) 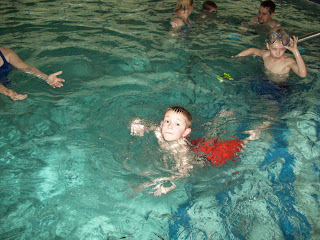 (Yes, poor Eldest is missing his TOP THREE TEETH.  And his fourth top one is loose but we are not letting him even wiggle it!)
But Hubby didn't come with us to the pool that day.  He started feeling ill that morning.  By the time we got back, he was in full-on SICK MODE.  Fever, chills, sore throat, sore back, etc.  Miserable.  Happy Valentine's Day!
By the next day (Monday), he wasn't any better and we couldn't get his fever to come down below 101.  Since it was a holiday and since we were from out of town, I ended up taking him to the Emergency Room: 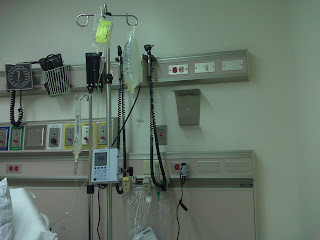 ...where we spent the next 5 hours.  He was given an IV to fight off dehydration, and administered antibiotics and steroids for a raging case of strep throat.  So do we know how to have a good time OR WHAT?!

Anyway, the boyz were totally being taken care of while we were gone.  Grandma broke out her "old skool" games: 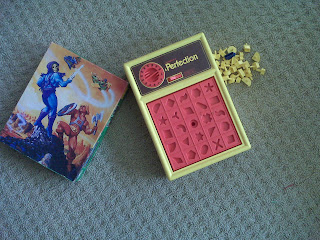 A Masters of the Universe puzzle (He-Man!  Skeletor!) and the original Perfection game
Thankfully, the medicines seemed to do their jobs and Hubby started feeling better...
Just in time to drive back to Massachusetts on Tuesday.  IN A RAGING SNOWSTORM!

So what normally takes us about 5-1/2 hours to drive took us about 7-1/2 hours. With 3 boyz wide-awake in the backseat: 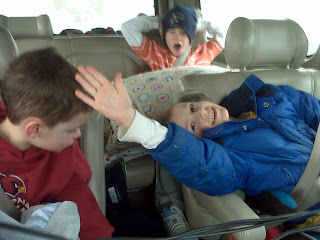 SHOOT ME NOW
And then, upon our arrival in the Trenches at 5pm last night, I had the distinct (dis)pleasure of attempting to tackle Mount St. Laundry: 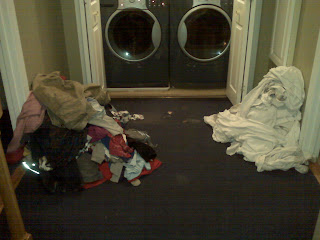 (Please note that there are already loads in both the washer and dryer.  And that E.T. may or may not, in fact, be hidden underneath that pile of whites.)
So that right there, my friends, is why I'm never leaving the Trenches with my whole family ever again.  Amen.
Posted by Sarahviz at Wednesday, February 17, 2010

oh my! that is quite the trip! and precisely why i never leave home with my family! :)

(the ET reference cracked me up!)

What a trip! The hospital???

I hate doing trips with my whole family- disaster tends to strike us, too.

how sad is it that all i could do was admire your front load washer and dryer, we just got new ones b/c old ones broke and we can't fit a normal size down in our basement b/c we got the basement finished, they had to tear them apart and put them back together.....

GREAT post. I don't know what happened at Blissdom (hint hint) but your posts since then have been extra hilarious and captivating. Love the ET comment.

And my hubs would totally end up in the hospital for strep throat. Totally!

1. You are a better mom than I am. No child that has recently vomited gets to snuggle with me (at least not without a bucket snuggled up with us as well.

3. How does one eat without any front teeth? Not looking forward to teeth falling out of my children's heads.

4. Before you went to the ER, did you try "legs on the wall?" I'm telling you, it's not antibiotics or steroids, but... nevermind.

5.Perfection, old school, was one of my all time favorite games.

There is always something. Trust me when I say that I totally know your pain.

talk about rotten luck!thank goodness for your sense of humor. It keeps you sane. I didn't know your family were fellow new yorkers! how did perfection and he-man avoid a lawn sale all these years? I was a she-ra girl myself...lol

Heather (One Take On Life) said...

Road trips...they always have a surprise or two don't they? I can feel your pain.

I totally think of Blades of Glory when I see the paired skating too.

Husband had the swine while I was at blissdom. Then last week, Angry Kid and I had full on sinus attacks.

We only have one kid and never go anywhere. I can't imagine traveling with three.

OMG!
I don’t mean to but I am laughing at this.
Every move you made there was something else happening!
Glad they are all better!

Stopping by from SITS!
Please stop by!
http://extremepersonalmeasures.blogspot.com/

Thank goodness for Grammy and Grampy's! I totally forgot about that game, Perfection, I'm on a mission to find it...loved it. Glad ya'll are feeling much better. Stinks to be sick...glad you didn't come down with it...and if you did, you'd still be doing laundry, tending to the kids, cooking...when does Mom ever get a break?

Glad you made it home safely and everyone is well again.

I'm sorry but I LOL and nodded a head of sympathy while I read along!

oh geez, that strep is going around here on the west coast too. blech! hope everyone is feeling better now!

and I, too, am admiring your washer & dryer. I think that's the set we looked at originally!

I saw your tweets from the road. Oh, my. So sorry! Hope you've recovered from your "vacation."

The picture of the game Perfection brought back so many memories.

Wow. That'd be enough to keep me home too. Glad everyone is okay now!!

I had to conquer Mount St. Laundry last night too. I sounds like there are parts of the trip that went well.

I'd have that same aversion to leaving, too. Glad you're all well and back and safe and sound (if not overwhelmed with dirty clothes).

I WANNA PLAY PERFECTION!!!
I was the MASTER at that game!
Good memories.

I think of Blades of Glory EVERY TIME I see any type of figure skater. Watching the Olympics has been difficult for me because it always makes me laugh.

Oh...I so relate. Just got back from a road trip last night at 10. Leaving really makes me happy to be back (except for the laundry, unpacking, etc...) You traveled with three boys - bless you, I only have 2 and that was hard!

No, you couldn't make it up if you tried! It looks like you had a great weekend though!