PPD and Me (Part Three)

My third pregnancy?  Was like a scene from Groundhog Day.  I was reliving my previous pregnancy ALL OVER AGAIN.  Same maternity clothes.  Same time of the year.  Same role of designated driver at the holidays.  Grrrr.  I was basically pregnant for 2 years in a row.  With only 3 months off for good behavior.

Thankfully, Middle seemed to grow out of his colic.  And we trucked along, as a family of 4.  With another member soon to be joining us. 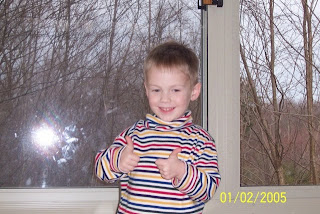 Thumbs up!  I'm gonna be a big brother again!  Wait!  Didn't we just GET a new baby?  Look he's right down there! 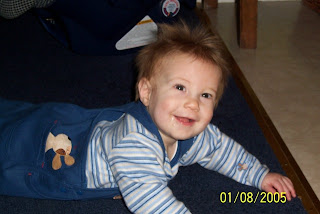 When I was pregnant with both Eldest and Middle, we didn't find out the sex.  With this pregnancy though, I HAD to know.  I needed to be mentally prepared for a(nother) boy.  I just knew he was. 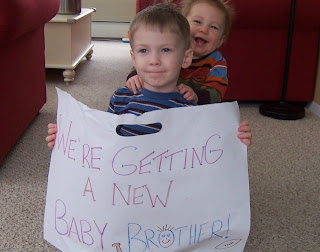 And our life in the Trenches continued.  Time marched on speedily, that 2005.  Eldest and Middle got older. I got bigger. 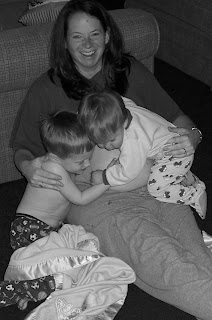 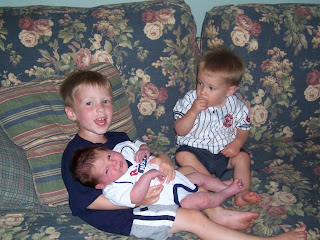 But, that summer?  Was actually okay.  That was the first summer that Granny 911 came to stay.  So I was extremely lucky (both physically and mentally) to have had round-the-clock help for those first 2 months.

In September, my mom left.  I quit breastfeeding.  I returned to work part-time, but only 2 days a week.

Work was my salvation.  At work, there was no crying.  No diapers.  I was able to be Sarah, not Mommy. Yet I would feel guilty for liking being away from home.

The days I was home all day were rough.    I found myself constantly on edge. Constantly guilty that there was just never enough of me to go around.  I felt like I was failing my children.

If I had to use one word to describe my state of mind at that time it would be this: OVERWHELMED.

Hubby would walk in the door at night after his work day, and for no reason at all, I would instantly be pissed at him.  I began having a nightly glass of wine.  That one glass of wine became two.  And instead of pouring a glass at 5:00, it became 4:00.

Later that fall, I was able to get away for a Girls Weekend in Myrtle Beach.  Mentally, it was the best thing for me.  To step away and remove myself.  To rediscover laughter.  Relaxation. Girl time.  That weekend really cleared my head.

(My 3 girlfriends on that trip had no idea I was struggling.  Nobody did.  I kept it all inside.  Certain that something was wrong with me for having such intense feelings of pure misery.)

When I returned to the Trenches, I knew I couldn't go on pretending nothing was wrong.  What kind of mother, after 3 nights away, dreads going back home?  Me, that's who.

And Hubby, even though we never spoke about it, knew I wasn't happy.  That I was simply making him the Bad Guy, even though he was doing all he possibly could to help.

So I made an appointment to see my OB/GYN.

I've really appreciated your sharing of your experiences with PPD. Having gone through it (still getting through it), I know how much it takes to put "it" out there.

Visiting from SITS - I've read your whole story and can relate.

I, too, had an angel baby the first go round followed by a colic/reflux babe who cried/screamed ALL the time (also esp. at dinner time) he was on medication for a time and was even treated at a chiro.

I think it was closer to 5 mo before he started settling down.

It was at the point that he was feeling better that I was able to clearly see that I, however, was not.
I also suffered from PPD and have plans to share my story on my blog as well. It's so good to support one another as so many suffer from this, yet are slow to talk about it openly. Thanks for sharing your story.

I am glad that you have an outlet to share and to educate on PPD. I look forward to reading more....

And thanks for sharing my SITS day with me...

i think it's so crazy that we feel so alone and try to keep it all in when there are so many others who feel exactly like us.

It's so hard to admit to these feelings when you're going through them. I often felt like running away.

I might be reliving your life - in girl version. My Eldest is 3, Second is 20 months, and #3 makes his/her arrival due June 28th. We have to find out what this one is so we can prepare for a third girl - yikes! When Baby #3 arrives, we will also have 3 under age 4. I work full time because it is my only sanity, even though I barely take home any money after paying child care.

I'm super-anxious to read on so I'll know how to handle the life that's about to hit me!

BTW, I read all the time, just don't comment much. You're a great writer - witty and inspirational. Thanks for putting yourself out there for us readers!

Stopping over from SITS!!! Good luck getting through this!

2 weeks after my son was born, my daughter turned, 2-my mother-in-law passed away and we had to take care of a funeral, then my husband had to leave me with the kids at the drop of a hat for 3 weeks...I was a mess but never told anyone. I can so relate!

I did it the same way, except with 9 months between each one, and the last one being a complete surprise. It's been NUTS, but we're doing alright despite the PPD that was never diagnosed and showed itself in nutty ways (throwing oatmeal bowls and shaving my head). Good luck to you!

I'm hopeful your sharing this helps someone else.

And that top picture of Middle? Delicious!

Overwhelmed, sleep-deprived, hormones out of whack...I totally understand. I had a bit of the baby blues when I had my second child, and it was hard. I didn't want to talk about it either. And I felt the same way towards my husband. Of course, it didn't help that he left for a four day golf trip when my son was only 8 weeks old and my daughter wasn't quite 2.5. yeah...not the best timing in the world.