The Gimmick:  He knew we were going into Boston overnight on Saturday.  He knew we had dinner reservations at Ruth's Chris (his favorite fancy schmancy steakhouse).  He thought just one other couple was going to meet us out later that evening.

The Surprise:  In actuality, we were going to dinner with 6 other couples!  I had reserved a private room at the restaurant from 5-8pm.  (Wife of the Year right here folks.)

When we arrived in Boston early that afternoon, I was furiously texting with one of the other wives.  There were 2 other couples staying in the same hotel.  I didn't want us to bump into them before dinner.  I texted her our room number so they could steer clear.  We only had just a few hours before dinner.  Hubby was on a mission to have a drink at Hennessey's in Faneuil Hall, his favorite Irish pub.  So we tossed down our overnight gear and headed out.

The Jig is Up:  Down the elevator...and into the lobby...where one of the wives was standing.

I thought about just walking quickly by her.  (Hubby was behind me).  But he had spotted her.  And right after that, her husband came walking in.

But!  All was NOT lost!  We fibbed and told him it was going to be the 4 of us for dinner, and that one other couple was meeting us out afterwards.  I think he was kinda still suspicious though.

So we went out for a few beers and returned to the hotel.  We went up to their room to have some snacks and there was a knock on the door.  Another couple walked in - totally surprising Hubby.

5 minutes later, another knock.  Another couple entered.  Hubby was totally caught off guard - surprised and happy.  So even though my cover was blown, he was still excited to see everyone and to know that we were all going to dinner together and staying overnight in Boston.

When we arrived at the restaurant, 3 more couples were there waiting in our very own private dining room.  It was awesome.

There were toasts; there was (an R-rated) birthday cake; there was laughter; and most importantly, dear friendships. 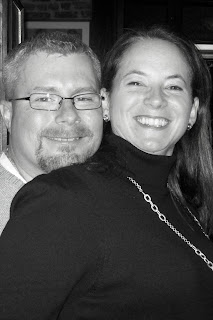 So happy 40th birthday, Hubby.  You are loved.  Not just by me and the boyz, but by many.  Even if you do smile like a cheesball when you're drunk.

Happy birthday to him! What a great surprise- even if it got found out a little early.

hahahahaha, that picture is fabulous, mostly because of the comment. Happy Birthday Hubby! What a wonderful treat Sarah - you def get wifey of the year, well done.

Sounds like you guys had a great evening. Happy birthday to your hubby.

For the last 2 years, I've been trying to pull off a small surprise birthday dinner for my husband. Thus far it hasn't happened.

Happy Birthday To Your Hubby!

What an awesome birthday for your hubby!

I tried to surprise mine hubby on his 30th. He totally figured it out.

Happy birthday to your husband! Nice work pulling that off!

Fun! For my 30th I lived in DC and went to visit a friend at her condo and all my Boston friends started coming out of closets and out from behind doors and walls. Surprises are SO fun - no matter how you pull them off.

Oh, and tell him welcome to the club. 40 is fabulous!