Now that I've admitted to the internet that I'm a tightwad, allow me to just take it one step further and discuss my past bikini wax experiences.  Because obviously I have no shame. 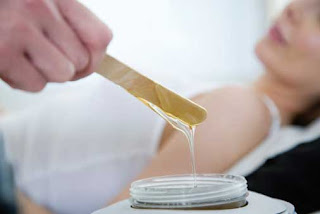 When I was working in Boston, my choices in the hair-removal department were pretty much either (A) a ritzy salon on Newbury Street or (B) a nearby salon in (kinda scuzzy) Downtown Crossing that I could frequent during my lunch break.  It was a no-brainer in my book - obviously I was a patron of the cheap salon for my $25 (at most) bikini waxes, along with their frugalriffic $10 manicures and $23 pedicures.

The salon was located on the second floor.  So to enter, you had to navigate a narrow staircase on the side of a Foot Locker shoe store.  (If you didn't know it was there, you missed it.)  Once inside, the pink-haired receptionist would (barely) glance up from filing her nails and motion halfheartedly for me to ascend up the back staircase to where the waxing room and tanning booths were located.

The Room:  Think teeny.  Think bright sterile light.  Think hard table.  And oh yeah, me, naked from the waist down.  To top it all off?  HuDge language barrier.  As in, No English Spoken Whatsoever.  Picture lots of pantomiming and gesturing as to exactly where/how much hair I desired to be removed from my nether regions.  HARDLY cringeworthy.

And so, because of The Language Barrier, there would be absolutely no conversation while the hair-ripping process was going on.  Just me, splayed, my modesty left somewhere back at the office. 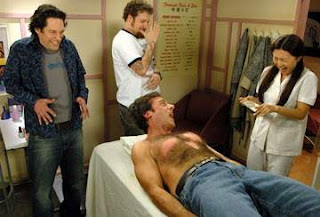 When the (excruciating) process was done, the "aesthetician" would then THRUST A MIRROR between my legs and brusquely question, "Ok?  Good?  Done?" To which I would nod meekly and scurry to get myself clothed again.

But as you know, I am no longer working in Boston.  Thus rendering my need for a new salon (only because Hubby and I were going to Maine alone and not because I actually keep up with the wax maintenance during the cold winter months because I certainly don't and as a matter of fact my next wax job probably won't be until at least June...)

This time, instead of looking at prices, I merely chose one I was familiar with.  A day spa where I had gotten haircuts and facials prior to the full-time job from hell that landed me in Boston.

Twinkling music greets you as you enter.  The technicians are all clothed in similar black attire.  No one speaks loudly or harshly. The atmosphere in there is calm, serene, tranquil.

For a wax, you are lead to a separate part of the salon (after being asked if you would like a refreshing drink).  In here, the lights are dimmed.  Similar soothing music is piped in. 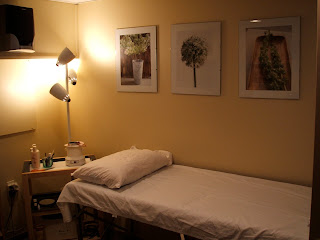 The aesthetician introduces herself to me.  I am left alone to de-pants, but a pair of paper underwear is left for me to put on to retain at least some semblance of modesty. (Who are we kidding though?  It's a bikini wax. But at least an attempt is made.)

The table is covered with warm towels.

The aesthetician makes small-talk with me the entire time.  Which is nice because it's distracting.  And the more distracted you are, the better, when it comes to that piece of tape being yanked off.  (Am I right?!)

Some sort of soothing aloe concoction is given to me to put on afterwards.

The whole process is still  uncomfortable, yes, but much less laughably Seinfeld-esque.

Yet it costs me almost double that of the Boston salon at $48.

But this time?  My annoying husband's mantra of "You get what you pay for" rings oh-so-very-true, much to my embarrassment humiliation chagrin.

So in Scarlett O'Hara fashion, I hereby proclaim I shall never skimp on a wax job again! 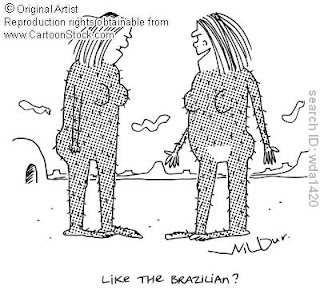 This is hilarious. I thought you were joking yesterday when you said you were going to talk about this. LOL

I'm a self-grooming gal, but I imagine that should I ever choose to go the waxing route, I will pay the money for the nice place, even though I'm a cheapskate, too.

omg...i can't imagine. i have to say that i've never had the experience of having THAT waxed, but i have had my brows (and chin) waxed and you're right...there is a very big difference in paying more. it's worth it to pay more. definitely.

LOL...I drove all the way to Beverly Hills once for a wax. It was QUITE fabulous, but sigh...not worth the hour long drive. I totally understand the get what you pay for thing though.

Oh girl, I'm a big fan of the cheapskate mani/pedi ($35 for both, getting one tomorrow actually!) and truth be told, I'll even do the cheapy brow wax to maintain BUT for the bikini wax you must go high(ish) end salon. I don't get them all that often but the times that I have, Bella Sante on Newbury Street as well as the Wellesley location is AMAZING.

I am SUCH a chicken - I have never gotten a bikini was in a salon. Luckily for me I'm of the thin, blonde hair variety so the job isn't too extreme :-)

But I am dying to frequent "The Naked Monkey" in Indy. I've heard it's the best.place.ever.

Maybe it's because I'm a waxing virgin, and bikini waxing ultra virgin, but don't leave us hanging! Just how were you embarrassed and humiliated??

I have NEVER done this. I'm 22. I think it's suppose to be in. I'm a self help kind of girl. I just cant get myself to go there and lay spread eagle while someone does their work. I guess its like getting a pap. it's their job. they have seen worse, i'm sure.

But OUCH! Good for you for going to the expensive salon! I think that is where I would go too :) Stopping by from SITS! Have a great day! xox

I hate the language barrier in the salons! :) I've never had the guts to get waxed down there.

I am in absolute agreement. You are not kidding sister - I have been "burned" literally too many times. I will only get it done at the Red Door salon if it happens at all - and that's because it's the only place where I didn't want to die from pain and shock afterwards.

No one is getting near my goods just because they only charge 30 bucks if you know what I mean.

Visiting from SITS - stop by when you can!

I recently had to explain The Brazilian to my husband. He was appalled.

As for you? Hell yes, you're worth it!

Never, ever. Mood music or not.

Oh, yes. This is sooooo true.

I would also like to add for anyone reading these comments: do not get your first Brazilian when you are 9 months pregnant. No matter how much you pay for it. Consider that my Christmas present to you.

This is too funny!

Just stopped by from SITS...

I am far too big a wuss to get bikini waxed, though I think once I got over the screaming and crying, I might actually like the end result. But getting from here (terrified) to there (hairless) is a big jump. Not sure I'll ever make it.

I have only ever been waxed by one person. It was the luck of the draw the first time I decided to get a professional waxing, but I loved her right away. She put me at ease, was chatty and funny during so that I didn't even have time to think about being self-conscious. I have followed her from salon to salon ever since. I love getting a Brazilian, front and back, and Darling Husband loves it even more. Mistress Pain (as I refer to her) isn't cheap, but she's sooooooo worth it. I may not get to go regularly, but I love it when I do.

I, too, have the annoying husband with the "You get what you pay for" mantra constantly humming in my ear. I, too, enjoy paying as little as possible, even if that means chintzing a little on quality sometimes.

But some things you just DON'T FUCK WITH. And your bikini line? Top of the list, baby.

I have to say that I have never done that before, but I've thought about it. If I ever do I'll be emailing you for the name of the place you went!

Wow, never done that, but in spas you usually get what you pay for!

Yep - I think when it comes to the deforestation of my nether regions, I definitely do not want to go to the lowest bidder.

(Found you through SITS - you were ahead of me today!)

I giggled all the way thru this!! I've never had anything more than my eyebrows waxed... I'm scared.

peeking in from SITS

Hi! Stopped over from SITS. the title of your post cracked me up.

It is SO true, that if you're gonna spend a few more dollars on something, it should definitely be this. Waxes are not the thing to skimp on!! Glad you had a good experience!

Man, Have I got brazilian stories for you!

Yes, totally agree that you get what you pay for in that department!! Glad you survived to tell about it. :)

This made me laugh the whole way through. I've never had a bikini wax. I'm chicken.