A Little Random Blather For Your Monday

So...the dead bird.  It's gone.  Hubby cleaned out the gutters on Saturday and was thus on the back porch a fair amount.  I can only assume it skeeved him out and he removed it.  I TOTALLY WIN! 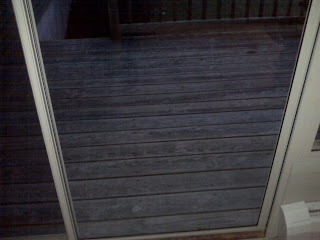 *****
I pulled the mother of all white-trash moves on Sunday.  You see, I was feeling a little barfy pukey hungover under the weather and my system needed some grease.  Hubby was at the Pats game.  Eldest was playing at a friend's house.  Middle, Baby and I were all still in our pj's.  At noon.  So I loaded the kids into the car, still clad in their footie pajamas.  I, braless, makeupless and wearing slippers on my feet, drove through the McD's drive-thru.  Yeah I did.

Have you seen this hair product?  My friend (and hairdresser) Michelle recommended it to me.  It's a little uh, phallic-looking, don't you think?  That's not even the best/worst part:  that rounded plastic top comes off, and then you push down on the pump to ejaculate release a little bit of white goo.  I'm so not kidding.

*****
Every Thanksgiving, it is a tradition in our (and probably most everyone's) Trenches to go around the table and say what we are thankful for.  We prep the boyz a few days in advance, to remind them that they need to start thinking about what they want to say.  (Middle already told me, "I would be thankful for my dog...if I had a dog.")  But this year, I'm going to switch it up.  I bought some white posterboard and titled it "Thanksgiving 2009:  We Are So Grateful" and am going to have everyone write down their thoughts and then sign their name.  I plan on making this a NEW tradition in the Trenches, and I know it will be a great keepsake to cherish over the years while the boyz are still at home.

*****
Lady Gaga.  Your thoughts?  And how did I not even know that there was a rumor that she is a hermaphrodite?  (Not that there's anything wrong with it...)  My BFF texted me after I tweeted last night about Gaga's odd dinosaur-bone/nude unitard outfit on the AMA's to break the news to me...My response to her was, "Is this common knowledge and something that I am old and out of the loop on?"  Her:  "Yes, mom".  Oh.

*****
I'm running a 5-mile road race on Thanksgiving morning because I'm a dumbass.  I have actually run the race route 3 times now in preparation and feel pretty good about it, even though I'm not nearly in as good of shape as I was in 2007 when I was running all those road races.  My previous 5-mile race times have clocked in at about a 9 minute mile pace; on Thursday, I'm shooting to run it in 50 minutes, which would be 10 minute miles.  So we'll see.
Posted by Sarahviz at Monday, November 23, 2009

Hi there.
I started following your blog via FB the other day and this is the first time that I have made it over here. Oh, I will be here often. You are a seriously funny girl!
For Thanksgiving we always do a variation of what you are planning for Thanksgiving. Sometimes we write the word Thanksgiving across the piece of paper and have everyone write something that they are thankful for off of it. Kind of like scrabble on paper. Then everyone initials or writes their name next to it. Seems to take the pressure off of sitting around the table feeling awkward about your answer. Oh wait. Maybe that's just me. ;)

That's a lot to digest on Monday but I'll have you know you aren't near as white trash as the lady I saw in McD's this morning. She was barefoot. Eeeewww.

I love Lady Gaga! I really don't care if she is a hermaphrodite either, she is incredibly talented! I think some people are getting confused on the hermaphrodite thing anyway. She *might* have organs from both sexes but it doesn't mean that she has a penis, and I think people are assuming that she does, or did. Even if she does, she still rocks!

I think everyone has gone to a drive through in something they hope nobody sees!

Good luck on your race!

Nothing wrong with hitting the drive thru in your pjs! That is what God intended!

oh sarah honey, drive thru in pjs no bra and no makeup...honey that ain't white trash, that is every damn day for me......rock on with the race !!!

Say hi to my sister when you're both shopping in the bitter pre-dawn cold. I just don't get the allure. We compared notes and she saves like 40% while I shop in the daytime and save, like, 30%. I'm okay with that.

Why is McDonalds the International Food of the Hung Over? What are the magical medicinal properties of french fries?

Yes, I use that phallic Bed Head product. You failed to mention that not only does white goo come out of the opening, the top is actually slanted and looks very "head"-like. Let's just say the product is appropriately named.

2. Are you saying there's something wrong with going with no makeup and no bra through the McDonald's drivethru? Because if so I am guilty! Talk to me when you've done it twice IN ONE DAY.

3. Your boys make me laugh. HARD. Can't wait to hear what they write on your posterboard. Hee hee.

5. I too had no idea that Lady Gaga was a hermaphrodite. And I didn't even see this unitard that you speak of, although now my curiosity is going to make me google it. Thanks a lot.

6. I cannot wait to hang out with you at BlissDom. I'm giddy.

I frequently wake up in the middle of the night, throw on slippers, grab the dog and my purse and go through the drive-thru at Walgreens to pick up my prescriptions! Its the only time there is no line :)

I love drive thrus. No bra.. put on a sweat shirt so what if it 90 degrees out. Can do all my errands.. bank, dunkin donuts and mc donalds and no one is the wiser.

Great Patriots game your husband got to go too.

My youngest 14 brought home the bed head recently and I was like..whaaaaat .... oh ok...

Cool randomness, my life is now complete with the pen.is shampoo, thank you.
Ha, ha, on the MickeyD's trip, hmm, that's only White trash if you go into the restaurant like that.

Oh my goodness. Your comment about the bedhead product just cracked me up. I can go to bed now because I've had myself a good laugh tonight. Thanks!