JEANS!  This is the first job I've EVER had (ever!) that I could wear denim to work on Fridays.

I get to watch Middle walk in his Kindergarten Parade today.  At 1:15.

At my old hell job, I would most likely have missed out.  Or I would've had to have taken half a vacation day to watch a 5 minute parade.

In almost 2 years at my old hell job, not one co-worker, not one, ever had the chance to meet my family.

But today, after the Kindergarten Parade, all 3 boyz are coming with me back to my work for the huDge Halloween party that my company throws for the children.  So in less than one week of work, my boyz get to see where I work and meet my co-workers.

That pretty much says it all.

(Stop rolling your eyes.  I'm still in the honeymoon phase with this new jobby job.  I promise I'll get back to poop and booger talk next week.) 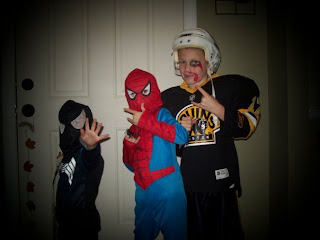 I don't blame you for being excited. For a working mom, this kind of thing makes all the difference in the world!

How cool! I think its great you love your new job so much. I can't really ever remember liking a job. At all.

Now that's what I'm talking about on my Kindness blog. How kindness pays off!! That is awesome, my company has a party for the kids also on Halloween, but too bad they are in NJ and I'm not! But it's the idea that counts. Have tons of fun!

Perfect!!! Sounds awesome! Will we be seeing you at Doreen's tomorrow??

SOO funny that my 4yr old got the same costume! Cute pic of the boys!

Sarah, this post totally made me smile. What an amazing thing to actually LIKE going to your job each day. You deserve it! Enjoy every second of your parade and your fun afternoon with the boys!

what a fun and exciting day!! p.s. I hate that you can wear jeans and I can't.

This is just awesome! I am so glad your new job is so family friendly!! It is so hard to strike a balance with work and home that it is always nice to hear about employers doing nice things like a kid friendly party.

and i am sure you look rockin awesome in the jeans friend!!

enjoy every ounce of the day!

Your new job sounds like a really good change for you and your family. It's refreshing to hear about someone who actually likes their job!

Fun! And you're making me miss working in a office...a little...sort of...ok not really cuz I love working from home.

But jobs that make you happy and giddy are the best jobs! Enjoy and enjoy some more. You deserve it.

A good company is so important. When I miss my job (which I often do) I miss the company almost as much as the people and the work. Staples is lucky to have you!

I'm so happy for you, what a blessing!

I'm so happy you're new job is going so splendifically!

YAY! So happy for you ;) A family friendly company makes such a difference...my husbands old company use to have holiday parties for the kids and then one for the adults...its so nice to know your coworkers families and have them meet yours! OUr kids are still friend with some of the kids they met threw work functions!

I'm excited for you! I get it. I've had terribly un-family-friendly jobs in the past, and I am so grateful for the one I have now. They are so flexible with adjusting my schedule for kid stuff. LOVE it!