I really wasn't gonna do this tonight.  I've been battling a head cold.  We were out of the Trenches this morning at 6am for Eldest's football game (don't even get me started ranting about THAT).  And my alarm is set for 5am to Shred tomorrow.  So all signs were pointing to NO.  No Emmy Awards for Sarah.

But the pull was too strong.  E! lured me in.  Once I flipped to the preshow and saw Ryan Seacrest's pointless banter with Blake Lively (holy usage of double-sided tape), it was all over.  I had to watch.

And thus, I bring you:

(Not booming announcer-voice)  Actually now that I think of it, it's notsomuch a recap as it is a play-by-play... 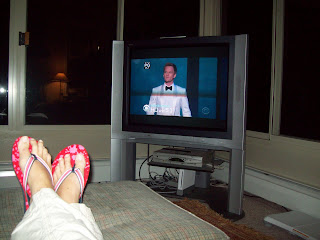 Who am I wearing, you ask?  Why, that would be Gucci Gap cargo pants and Versace J. Crew flipflops.  Not shown:  Black Gap tee.  Sex-ay.

8:04  Was anyone aware that Neil Patrick Harris (ok, there's no way I'm typing THAT long name all night.  He shall hence be referred to as NPH.) could sing?  And sing well?  Oh, but now he seems a bit nervous and shaky as he's talking.  Perhaps he should do his entire hosting bit in song?

8:14  What's smaller than a size zero?  Whatever it is, that's what size Kristin Chenoweth is.  She just won for Best Supporting Actress in a Comedy.  Her dress is silver, sparkly and cute.  And a negative size.

8:36  Toni Collete wins for Best Actress/Comedy.  I like the color of her minimalist strapless dress (a peachy salmon).  And her Aussy accent.

8:52  Alec Baldwin wins for Best Actor/Comedy.  He dedicates the award to Lorne Michaels.  And when the camera pans out to Lorne in the audience, you can't help but notice the huDge tits on the woman sitting behind him.

8:56  A dancing segment with Max and Karina.  Really?!  I need some wine with all this cheddar.

9:07  Amazing Race wins for Best Reality Show.  I think it has won every year since the Reality category started.

(I'm officially bored.  It's the Miniseries/Movie awards.  I haven't seen any of the nominees in ANY of the categories.  *yawn*)

9:26  Patricia Arquette's left boob is desperately attempting to escape from her dress.  How is her nipple NOT showing?!  Oh, and does anyone else think that the lead actress in The Vampire Diaries is totally a J. Love Hewitt clone?

9:32  This schtick with NPH is excruuuuuuuuuuuciating.  And not funny.  He's pretending to be an evil scientist singing blogger?  I so don't get it.

9:34  Jessica Lange looks lovely but a bit Joan Rivers-esque.  She's def had work done on her face.  Her forehead is totally tight and wrinkle-free.

9:42  Who is that blondie Anna Torv (whoever she is) is presenting with Jack Bauer Keifer Sutherland?. She's gorgeous.

9:55  I'm admitting right here, right now, that I have NEVER seen one single episode of the Jon Stewart show (it just won).

10:02  Jimmy Kimmel just made me laugh out loud with his electronic voice and pratfall.

10:20  Benjamin Linus (Michael Emerson) wins for Best Supporting Actor/Drama.  He creeps me out.  Even in a tux.

10:22  The woman who played the President in 24 just won for Best Supporting Actress/Drama.  She kinda looks like Meryl Streep.

10:23  Sara McLachlin is singing for the "In Memoriam" segment.  The funny thing is, as soon as it started, I thought to myself, there is NO WAY they could put Michael Jackson in this.  And then, yep, they do.

Note to self:  Consider watching Mad Men. What's all the hype about?

Sidenote:  What is it with all the men wearing nerd glasses tonight?  Keifer Sutherland, Kevin Bacon, Simon Baker...

(in weasly Ryan Seacrest voice)  Sarah in the Trenches.  OUT!
Posted by Sarahviz at Sunday, September 20, 2009

I actually have a crush on Ricky Gervais.

And wait, did you say you're going to wake up at five AM to work out?? Are you sick?

Thanks for your hard work tonight! You see, I did none of this week's homework for bible study tomorrow, so I had like 3 hours of work to do tonight and banned myself from the TV. Now I'm all caught up! :)

Cool now I don't have to watch it on my DVR at home lol..

Funny...thanks for sharing! SITS sent me by, and I'm glad they did...

Ohh you definitely need to watch Mad Men - such a good show!

What a great recap! Have a blessed day!

I watched a little bit on the Emmy's but gave up so thanks for the recap.

Awesome recap, I watched the whole show also! I love to watch this stuff. I have to admit I didn't like some of the dresses this year. I hate it when the ladies think it's better to show everything they have instead of looking like a lady they look like....well never mind, it's only my opinion!

This is the first time I've watched the Emmys in YEARS. And it was mainly because NPH was hosting. The singing blogger thing? It was a spoof of a web show that was created during the writer strike (I think). Dr. Horrible's Sing-Along-Blog. I thought it was genius.

You may have never seen Mad Men but I've never watched an episode of 30 Rock. It happens.

Hey you stole what I wear every day of my life!

I think teh Emmys were the best in years and I am waiting for Mad men Seaosn 1 to come on demand!

Thanks for writing this! I didn't get to watch last night and now I got it all!

And I need to watch Mad Men, too!

NPH did a better job than most, it was a better show than usual I thought.... and funny, I TOO THINK Tina Fey and I could be BFF's! I have a platonic "funny crush" on her, nobody is funnier!!!

Love the recap.
Cameron from
Conquer The Monkey

I missed the emmy's last night and was so dissapointed, after this post I don't need to!

Ok -- you have to watch Jon Stewart. I don't stay up late plus I don't have that cable channel. So whenever I need a laugh I go to http://www.comedycentral.com/ and watch a snippet from his show. He is soooo funny.

Seriously. Watch Mad Men. It's excellent drama. Stopped by from Sits, love your blog and I am going to follow if you don't mind!
:O)
x

I made the emmy's more fun by instituting my own new category on Twitter, soliciting the only nomination in the new category and delivering my acceptance speech.

Since I didn't get to watch the Emmy Awards here in Norway I'm grateful for your informative summary;-)Now I'm up to date...

Just stopping by from SITS to say hi!

I didn't watch the Emmy's so thank you for recapping it and for pointing out that it sucked. Love you!

Great recap!! I dvr'd the show & went through it fairly fast..your recap really said it all in a nutshell! BTW, how was The Good Wife? I forgot to DVR it?>