See, I was supposed to run a 5K last night after work. One of my co-workers urged me to run it with her and I agreed. Because? She promised me that there was a cookout at the end with AWESOME food. It was FOR CHARITY.

So I got to work yesterday and my co-worker ended up not being able to run that night. She had double-booked herself and had to run a different race (that she had paid actual $ to run). I wasn't all that upset and in fact was completely relieved.

But I knew I would feel kinda guilty if I didn't do SOMETHING exercise-ish after work.

Thus began another adventure with my 2 boyz in the double-jog stroller: 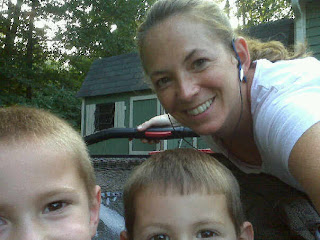 Here we are looking happy. Please note that this was taken before we left the driveway.

It is pretty much downhill the entire way to get to Eldest's football practice field. So I ran. For about 18 minutes until we reached an uphill part. I was sweating profusely and gasping for breath as I huffed to my two young offspring, "*gasp* GET *gasp* OUT *gasp*". So they both bounded and be-bopped freely the rest of the way as I pushed an empty (and MUCH lighter, might I add) stroller.

Football practice goes until 7:45pm. With summer coming to an end, it really starts to get dark by that time.

And? I had forgotten that the SUV that Hubby had driven to practice didn't have the little boyz' carseats in it. So instead of being able to heave the stroller in the back and catch a ride home...yeah, I was pretty much shit outta luck.

So I consciously left practice early (probably 7:30ish) to make my trek back to the Trenches UPHILL THE WHOLE WAY. Pushing 67 pounds of whining.

You know how when you're pushing something heavy (like a stroller up a hill) you tend to bend over, head down, and stick your ass wayyyyy out? It wasn't pretty folks. Thankfully it was getting dark quickly.

But the imminent darkness factor was causing The Whiner Twinz much stress.

Middle began to cry. My bug-bite boy was getting eaten alive.

Did I mention we were going uphill? In the quickly-approaching dark? And that it was f'ing hot and humid?

When we made our left turn off the main road and onto the STEEP hill that intersects with my subdivision street, I was done.

They scampered out of the stroller, still crying, mind you, and walked alongside me.

For about half a minute.

By this time, I was blinded by my own sweat dripping into my eyes. (And to be honest? I was kinda skeered of da bears myself. And the damn bugs were feasting on my skin too.)

We finally reached the crescent of the hill. And who should drive by right then?

I waved to him with my middle finger as his tailights rounded the bend to our house.

Haha! I'm sure it seemed like a good idea in your head!

I am beginning to think that maybe you need to sell that stroller at a yard sale! Too funny though! Okay I know it wasn't funny at the time it happened but it's funny now!

Sounds like something that would happen to me. I think the universe is against us when we want to exercise. Ducks tried to attack me and Sugarbaby as we strolled around the park this morning. I threw half a leftover blueberry muffin at them and ran.

Funny and how did the hubby wave back... love it.

Too funny! I avoid this problem by not working out at all.

Stop by my place: Life Makes Me Laugh

Seriously, I'm dying here. That is too funny. That is the short of shiz that happens to me.

Hubby got a gesture of *love* as I call it. I can also understand the fear of bears, they are dangerous creatures have you ever seen Yogi Bear? They steal your food & then laugh about it. Rotten bears.

Sounds like you got more of a workout in than if you HAD run that 5k!

I would have said screw the carseats, so I totally applaud you!

Anytime I take my kids with me excercising it ends up like this..lol! Me cussing like a sailor, and them in total revolt.

But hey!! You got your workout in:)

Oh boy... are your legs sore today? Mine are sore just from reading this! ;)

I think that workout counts as at least a week's worth of exercise. RIght? I say take next week off. :)

this post was histerical. I am sorry to laugh at you but this would totally be me if I ever tried to run with my kids.

This is why I don't exercise.

Oh my!! I just love your stroller stories!! They get better and better! I can't even imagine the pain, but the way you tell it is just hilarious!!

love it. I wanna come visit the trenches!!!

Because you give some good blog I've given you an award come pick it up.

But just think how good your ass looks now. Or will, once you do that a couple more times. That's what got me through pushing the stroller up and down the hills when we went to San Francisco :-)

The tales that live in those wide-load beasts of burden.

Dude. I think you would have been better off running the 5K. I do hope there was awesome food afterward.

Mwahahahaha! Way to go! I would have made the kiddo's walk...but I'm mean! ;)

Oh this makes me laugh (sorry)! I decided not too long ago to walk to the park 1.5 miles away with a few hills in-between and the double (non-jogging) stroller. I too couldn't see from the sweat in my eyes by the time I got there. And then I called hubby to meet me there cause there was no way I was walking back!

Oh I am sweating and stressing just thinking of it. Mine would be bawling from the bug bites and I would have had to leave my ass and at least one child at the bottom of the hill. You rock.

Crusin by from SITS while I sip my coffee, good thing I was between cups when I landed on your page. I remember days like that, but alas I'm a grandmother, so now I do things like, hey-he's going home tonight, let him eat the whole bowl of candy, I don't care.

Stopping in from SITS. What a great story. I took my boys on a hike at dusk and the 7 year old was worried about mountain lions the entire time.

If I had kids, I know I would be doing the exact same thing! Thanks for the giggle. :-)

Visiting you from SITS. Hope you had a great holiday!