The Case of the Incessant Beeping

Before we left for vacation, there was one Saturday I kept hearing a beep.

(And no, it wasn't those voices in my head.)

I'd be in the kitchen doing dishes, and something would beep.

5 minutes later, I'd be sitting at the kitchen table with my laptop uhhh...mopping the floor! and something would beep.

Hubby, who was outside washing the car, was summoned.

"I think the security alarm needs a new battery. It keeps beeping."

Since we didn't have a replacement battery on hand, he simply took the battery out and went on his merry way.

(You know where this is going, right?)

THE DAMN BEEPING MAKE IT STOP.

"Honey, it's still beeping, I swear. Maybe there's something else wrong with it?"

Coincidentally enough, our next door neighbor Joe is a security alarm installer. So Joe came over to take a look at it.

He went down to the basement and...(insert technical jargon about hard wires and routers and blahdeblah)...well, completely disconnected the entire system.

So picture 3 grown adults, standing there, arms crossed, brows furrowed, staring at the remnants of what once was our alarm, which had been completely dismantled, wires everywhere...

ready to pounce into action at the sound of the next beep and SOLVE THE MYSTERY.

And when it happened?

Realizing that it was not, in fact, the alarm, but a dead cell phone beeping atop the refrigerator. 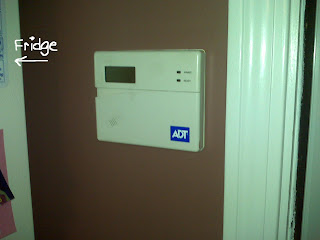 There goes another hour of my life I'll never get back.
Posted by Sarahviz at Tuesday, August 11, 2009

HA! I hate mystery beeps. Our invisible fence is a frequent culprit. Lately, P and I both have new cell phones and we are not yet familiar with the various beeps and rings so whenever something goes off we're like "is that you?" and the other one is like "I don't know. Maybe?" And then we scramble for our phones.

Then there is the comforting sound of Tweet beeps from my computer. heh.

We've got all kinds of mysterious beepers in our house - the microwave timer when no one bothers to press "clear", the cell phones, the regular cordless phones, the refridgerator when the door isn't closed all the way.

The kicker is the bird - he knows all the beeps and is happy to imitate whenever he wants a little entertainment in watching us try to find the beep.

I do not heart mystery beeps. They make me go GAAAAAAAGH!!!!

Ours is always the smoke alarm. Or a mobile phone.

Perhaps they could start using mystery beeps as a form of humane torture for prisoners of war!

Ours is the stove. No reason. Just beeps. Drives me mental.

Did you get the alarm system back together?? Ours would still be dangling.

OMG - this just happened to us last Friday night. While we were sleeping - of course - the battery for one of the smoke detectors died. It's enough to drive you BATTY.

the mystery beep or the random battery operated talking dog that i hear in my sleep? not fun.

I love solving those little mysteries!

LOL! That would totally be me expect my hubby just tell me I am crazy and there is no beep.

Ha Ha! That, indeed, was too funny!

LOL! At least you solved the annoying mystery.

Musings of the Mrs. said...

Mystery beeps drive me crazy. I always just KNOW it is the smoke alarm and that the entire thing is going to go off at 3am if we don't fix it. If its not that, and I have no idea what it is, I will track that sucker down for hours. Glad you found it...and not at 3am!

That pretty much sounds like something I'd do. It's good to know I'm not alone.

I've done that a million times. I hate those darn mystery beeps!!!!

I have SO been there and done that, lol!

I threw out several smoke detectors and made the maintenance guy come over on the weekend swearing my apartment was haunted, only to find out that there was a forgotten detector in my closet. So embarrassing!

Some hours aren't worth having back, you know?