Live...from the Trenches...it's the 2009 Oscar recap! (I try to do this every year. It's the one night I actually stay up late-gasp!-and watch live TV instead of the DVR-double gasp!)

Brought to you by Robert Mondavi, Nike, the Gap and Caramel deLites Samoas Girl Scout cookies. 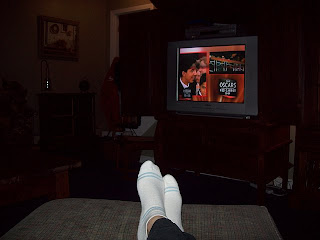 My co-host and I are happy to have you with us this evening, right Co-Host? 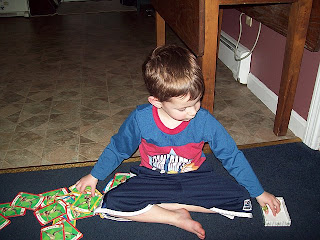 Apparently, Co-Host got bored with the pre-show festivities and has moved on to other things. Bygones.

Opening number: There is nothing sexier than a man who can sing and dance and look hawt all the same time, is there? Oh wait. Yes there is. An Australian accent. I'm now officially a Hugh Jackman fan.

8:53 p.m.: Confession: I totally have a girl crush on Tina Fey. She's just so witty and sarcastic and cool.

9:03 p.m.: Jennifer Anniston! Please pan the camera to Brangelina, pleaseohplease...Yes! A quick shot of AJ. And then again! (They show a shot of the power couple in the front row.)

Damn, no drama. What do you think Angelina was thinking the entire time while her husband's radiant ex-wife was standing onstage in front of her?

Crap! I hear someone crying upstairs...

9:45 p.m.: Eldest? Could win an Oscar tonight. That is, if they measured BEST PUKE. Yeah. Before I had even ascended halfway up the stairs, I could smell it. Poor buddy was covered in it. Even his socks. And yes, there was chunkage. Lots.

So now I have a sick pal next to me, a load of laundry going (comforter, pillow and mattress pad) and another load of sheets left to do: 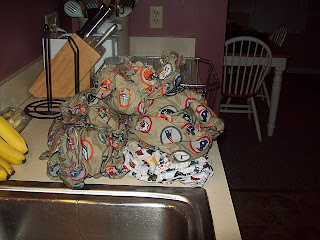 Why yes, those would be sopping wet rinsed out sheets and pjs on my counter, next to the bananas. (HUBBY) For the record, I was fully prepared to just toss everything in the trash, but Hubby's more economical head prevailed and it was he who was hosing off puke chunks in the driveway in the freezing cold. Bless him.

Well folks, looks like this year's Oscar commentary is gonna have to be cut short. Sometimes other things are simply way more important. 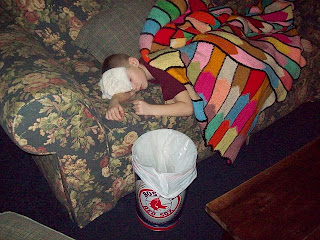 As for the Oscars, I only watched a little but I cringed a little when I saw the camera go to AJ when JA was on the stage. I am definitely a Team Aniston girl.

SJP - when did she buy those boobs? And why didn't she buy a dress they could fit in?

Penelope - LOVED her necklace with the power of a thousand burning suns.

Angelina - her earrings and ring were so stunning - I loved loved them! I think I dreamed about them. I wondered what Jen must have thought, with them sitting front and center, holding hands, double nominations, 6 dozen kids, and her starring in a dog movie. Seems like she would be the SUPER uncomfortable one.

Hugh Jackman - can sing! I never thought about him until I saw Australia. Now, I think of him often and with fondness. ahem.

Sorry your recap got interrupted in such a barf-tastic way!

Sorry the puke-fest interrupted your big night in. I only made it til about 10:30.

I too love Tina Fey. I want to be her BFF. I really don't see the big deal about Beyonce. Love Kate Winslet didn't love her dress. Natalie Portman also wins my Most Stunning award.

you should win an oscar for being able to describe puke so well.....
there is nothing more pitiful than a sick kid - (Well maybe branjolina)
I hope he feels better

Thanks for the recap.

Hey, looks like you missed out on the song/dance number Hugh did with Beyonce (and then some other folks at the very end). Trust me, the puking was more entertaining.

Poor kiddo! I like the garbage can by his head. I totally to that with my kids, too. It's so much easier than trying to get them to the toilet on time.

Poor baby! Hope he's feeling better! I have to say that I watched a bit of the Oscars, but I wasn't too into it considering the only movies I'd seen were in the "Animated" category! But I DID manage to see Goldie Hawn's scary tight mouth. Why would she think that looks better than wrinkles???

For an extra $5 a month you can get a DVR from the cable company and you wouldn't have to miss a moment of your favorite show(s). Ask Sue if she likes it.